Here is the initial report from the Minneapolis Police Department on the arrest of George Floyd. Except for smartphone it's likely this horrific racist murder would have gone largely unnoticed and unpunished. 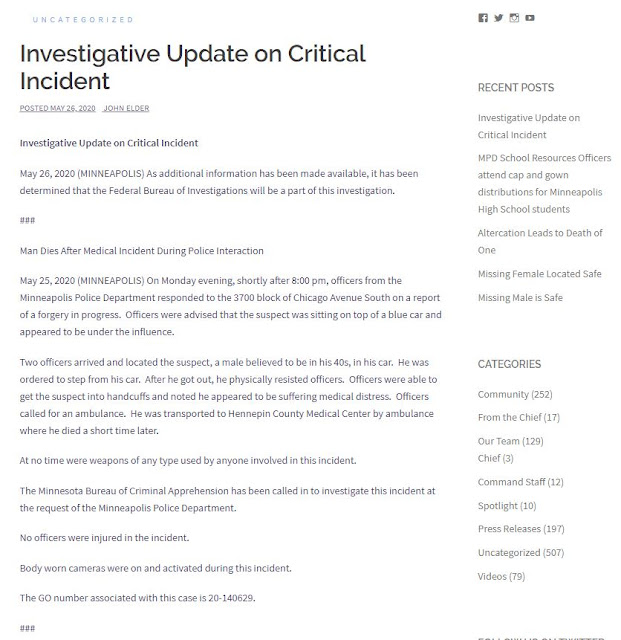 Via The NY Times, who has more about it.

(Will you ever believe the police again?)

They also interview others who Derek Chauvin abused when he arrested them, and note that "Minneapolis Police Use Force Against Black People at 7 Times the Rate of Whites."

David - I don't agree with your casual attribution of dishonesty to all statements by all policemen, based on that one deceptive police report.

I didn't make a "casual attribution of dishonesty to all statements by all policemen."

Looks roton at the core in Mineapolis though:

In 2015, Minneapolis officer Rod Webber threatened a black teenager, Hamza Jeylani, who captured the incident on his phone. "Plain and simple, I'm going to be honest with you. If you fuck with me I'm going to break your legs," Webber told Jeylani. When Jeylani asked Webber why he was being pulled over, Webber replied, "because I feel like arresting you."

in 2013 the Green Bay, Wisconsin Police Department responded to a disturbance that involved two off-duty Minneapolis police officers. Both officers were subsequently fired. The incident began with Shawn Powell and Brian Thole, both employed at the department's north Minneapolis precinct at the time, texting a Green Bay officer he knew, Nate Allen, referring to Allen as "Nigs", and, when Allen did not respond, "you faggots". Referring to a black man who drove by, he said to Allen and another Green Bay officer, "What is that? Green Bay is too nigger friendly." Powell repeated the racial slur a number of times later related to a clash he and Thole had with four black men, at least one of whom Powell hit in the face. Questioned about what started the incident, Powell told Green Bay police that the other men were "doing their monkey shit".[142] When Green Bay officers did not pursue the black citizens, the Minneapolis officers became abusive with their professional peers, calling them "fucking jokes", and repeatedly disparaging them with similar language. Thole tried to talk them out of making a report because, he said, "I have a lesbian fucking chief who's looking to fire people for any reason."[143]

Both officers had previous misconduct issues. Powell was involved in a lawsuit against the City related to he and other officers severely beating an African American man in 2010. The suit was settled with Minneapolis paying the victim $235,000.[144] Powell was also involved in a lawsuit for the wrongful death of a Somalian man who, according to legal documents, was brutally assaulted, tortured and killed.[145] Both Thole and Powell were fired in December 2013.[146]

Three white Minneapolis police officers were charged in the beating of an African American man in a suburb south of Minneapolis, in 2013. William C. Woodis, Christopher J. Bennett and Andrew R. Allen were off-duty and having drinks at a bar when a black man introduced himself to them. When Apple Valley, Minnesota police were called the officers claimed that Spann followed them out of the bar, but security camera footage showed them following him. Spann's nephew, who was also hit by the officers, as well as another witness who did not know Spann or the officers, said that the officers were "on attack". In June 2013, Woodis and Bennett pled guilty to misdemeanor charges of disorderly conduct.[147] Charges against Allen were dropped.[147] However, it was also alleged that during the incident, which occurred in November 2012, all three officers were also allegedly used racial slurs as well, which made them all subject an internal investigation by then police chief Janee Harteau.[147] The internal investigation was still ongoing in December 2013.[146]

On October 10, 2017, a Minneapolis jury convicted former Minneapolis police officer Christopher Reiter of third degree aggravated assaulting Mohamed Osman during an arrest in May 2016.[148] During the incident, which was caught on tape, Reiter kicked Osman in the head.[148][149] On December 12, 2017, Hennepin County District Judge Fred Karasov sentenced Reiter to serve six months in a workhouse prison and three years of probation, the maximum sentence for his kind of conviction.[150] The incident also resulted in Reiter being stripped of his peace officer license, thus barring from him from becoming a police officer again.[149]


On July 15, 2017, Justine Ruszczyk Damond, a 40-year-old Australian-American woman, called 911 to report a woman possibly being raped in an alley behind her house. When the police arrived, she was shot and killed by police officer Mohamed Noor, of Somali-American descent, who had been on the force for two years. Following an eight-month investigation from Hennepin county attorney's office and the Minnesota Bureau of Criminal Apprehension, Noor was charged with third degree murder, second intentional murder and second degree manslaughter. In April 2019, Noor was convicted of third degree murder and second degree manslaughter but acquitted of second degree murder. On June 7, 2019, Noor was sentenced to 12.5 years in prison. Damond's family brought a civil lawsuit against the city alleging violation of Damond's civil rights, which the city settled for twenty million dollars, one of the largest-ever settlements in a suit involving a police killing.[citation needed] In July 2019, Noor filed an appeal to overturn his convictions of third degree murder and second degree manslaughter, the appeal is still pending.

Shooting of Jamar Clark
See also: Shooting of Jamar Clark
The Minneapolis police shooting of Jamar Clark on November 16, 2015, heightened tensions between the city and its citizens. Clark, a 24-year-old African-American man who family say was starting to find his way after a troubled past, died two days later. Police said that Clark reached for Officer Mark Ringgenberg's gun when Officer Dustin Schwarze shot him. Officer Schwarze and Officer Ringgenberg responded to a domestic violence call, but several witnesses disagreed, saying that Clark was handcuffed and thus unable to at the time. Video showed the struggle and confirmed that Clark did indeed try to disarm Officer Ringgenberg. Mayor Betsy Hodges requested an investigation by the United States Department of Justice Civil Rights Division of the federal government.[151] The U.S. Department of Justice (DOJ) arrived a week later. Eight months later, Hodges announced that the DOJ had declined to bring civil rights charges confirming the officers' account of the incident.[152]

Both Schwarze and Ringgenberg had been previously sued for misconduct in federal court.[153][154]

Rape kits
The department has a large backlog of rape kits it has never tested. In 2015, 194 such kits were discovered. Mayor Jacob Frey called the unprocessed evidence an "unjustified mistake". In 2019, about an additional 1,700 untested kits were found. Police Chief Medaria Arradondo said he had no explanation for the discrepancy in the reported numbers or why so many kits went untested.[161]

Layzej wrote:
Minneapolis made $14 million in payouts for alleged police misconduct between 2006 and 2012

Imagine how bad these statistics would be if racial discrimination actually DID exist in America.