NASA and the National Snow and Ice Data Center gave a press conference this morning on Arctic Sea Ice, and here is the most important graph: a sharp decline in "old ice": 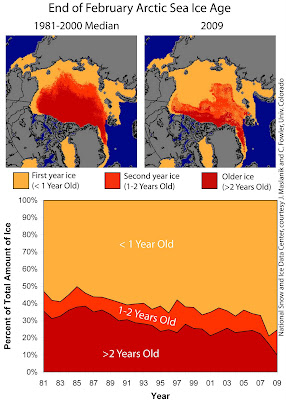 "Old ice" is what sticks around year-after-year (here, one, two, or more years). It's the thinner ice that melts away every year.

As the chart shows, "old ice" is decreasing in percentage, and what's interesting is it continued to decrease (and sharply) last year, even though 2008's sea ice extent was slighter higher (at minimum) than 2007's. So when climate change deniers say that sea ice area is increasing (2008 compared to 2007) and this is a sign of a cooling globe, that's not the whole story.

Multiyear ice is only about 1 meter thicker than first-year ice; the average thickness of all of it is about 9 ft (3 m). 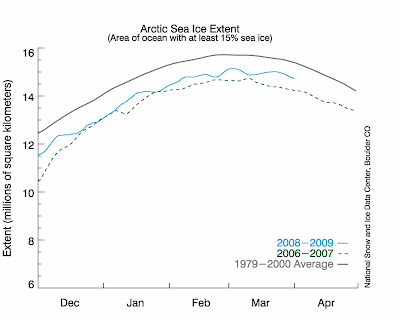 All six of the lowest years have occurred in the last six years, since satellite monitoring began 30 years ago.

By the way, total Arctic sea ice volume is about 16,000 km3, which is about the volumes of Lake Superior + Lake Michigan.

The NSIDC's Walt Meier said that it's "fairly unlikely" that the Arctic will be ice-free in the summer by 2013 or 2014, which some people have been suggesting, but that it's not out of the question and anyone would have been "laughed out of the room" if they suggested that 5 years ago.