Oil Prices and the Recession

I've proposed before that last year's spike in oil prices help caused our current recession, but no one else seems to buy this. But here's more evidence that it was a significant factor: 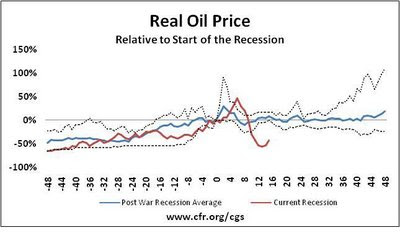 This chart is from Paul Schwartz from the Council on Foreign Relations, via Kevin Drum.

Spikes in oil prices sure do seem to have something to do with starting recessions -- and last year's spike (red) was bigger than usual.

To me this makes a lot of sense. Oil prices were up sharply at this time last year: 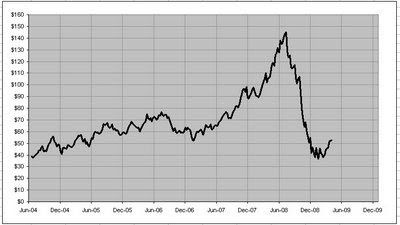 In the course of a year and a half, everyone with debt obligations, mortgages and the like, quickly found themselves paying over twice for oil and gasoline what they were. This doesn't just affect your gas tank, it quickly bleeds through all aspects of the economy, since everything you buy gets on the shelf via oil-based transport. Monthly inflation rates doubled or more.

I don't know what this cost the average consumer, but I would guess a few hundred dollars a month. And since you can't really live without gas for your car and food from the store, people had no choice but to pay the higher energy prices and...for those near the edge, skip on their mortgage payments. After so many defaults the whole system just tipped over.

This certainly isn't high-grade economic analysis. I've just surprised that I've never (I think) even once in the last year and half seen any professional note the role high oil prices might have played in causing this recession.

PS: Here's something Brad Delong said in August 2006, and something I wrote. He was clearly right. I wasn't.

Of course, the crappy economy throughout Reagan's first term did not follow a big spike in oil prices, though it did follow tax cuts for the rich.