Deniers: Doing their Algebra Right on the Page

This is good: So there's this unit going around making all kinds of claims like there is no greenhouse effect, CO2 is not a well-mixed gas, and those sorts of things. To try and garner respect they've given themselves a name reminiscent of Newton -- Principia Scientific International -- and are publishing what they call "studies." There is a blog and a book, both named Slaying the Sky Dragon, by the Tim Balls of the world (and that guy Mann laid out). One of these people, named John O'Sullivan, says he is "the internet's most read writer on the greenhouse gas theory (August, 2010)...." Another has a blog that makes daily posts showing nearly ever established scientific principle is wrong. (Today's refutation is the Stefan-Boltzmann Law; an earlier post showed that the Schrodinger equation is useless because it cannot be solved, and a manuscript shows that nearly everything else is wrong.)

Anyway, on the blog they mention that "both Postma and Nahle have recently published groundbreaking papers discrediting the GHE [Greenhouse Effect]." You'd think a paper that disproves such an important result, proposed almost 200 years ago by the great Fourier would be sought by renowned journals like Nature or Science, but no, it appears in that other journal of note, Principia Scientific. How good is this new journal? (This is the best part.....) They do their algebra right on the printed page! 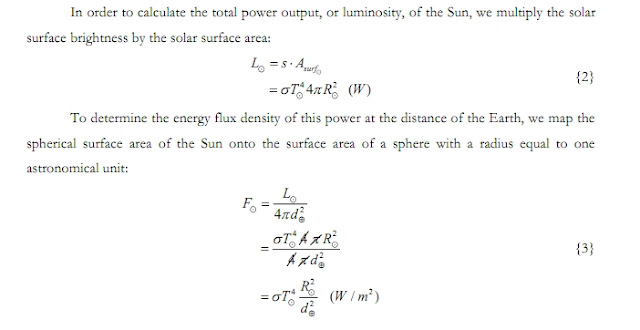 Those slashes in Equation 3 aren't Dirac notation, but cancellation of the 4π's in the numerator and denominator -- because, you know, it's important to show all your work.

Why hasn't Nature thought of doing this?