The Voyager 1 space probe is now about 17.8 billion kilometers from Earth (NASA has a nice counter here), but an article in today's NY Times puts that in perspective: 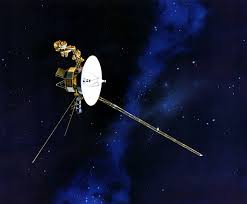 If Earth were in Orlando and the closest star system, Alpha Centauri, were in Los Angeles, then NASA’s two Voyager spacecraft, the most distant manmade objects, have traveled just one mile.