Sometime when you have a half-hour you really ought to read Wallace Broecker's incredible 1975 paper in Science magazine, "Are We on the Brink of a Pronounced Global Warming?" I'd heard mention of it but never sat down and just read it. It's simple and clear and amazing for its prescience--36 years ago, Broecker predicted almost exactly where the world's climate is right now.


"The fact that the mean global temperature has been falling over the past several decades has led observers to discount the warming effect of the CO2 produced by the burning of chemical fuels. In this report I present an argument to show that this complacency may not be warranted. It is possible that we are on the brink of a several-decades-long period of rapid warming. Briefly, the argument runs as follows. The 18O record in the Greenland ice core strongly suggests that the present cooling is one of a long series of similar natural climatic fluctuations. This cooling has, over the last three decades, more than compensated for the warming effect produced by the CO2 released into the atmosphere as a by-product of chemical fuel combustion. By analogy with similar events in the past, the present natural cooling will, however bottom out during the next decade or so. Once this happens, the CO2 effect will tend to become a significant factor and by the first decade of the next century we may experience global temperatures warmer than any in the last 1000 years...."

Broecker assumed a model that is as simple as could be. He assumed:
The last assumption is equivalent to assuming climate sensitivity for a CO2 doubling is 3°C.

Broecker gives his reasoning behind each of these assumptions, and they're straightforward to follow. Based on only this, he calculates the following values: 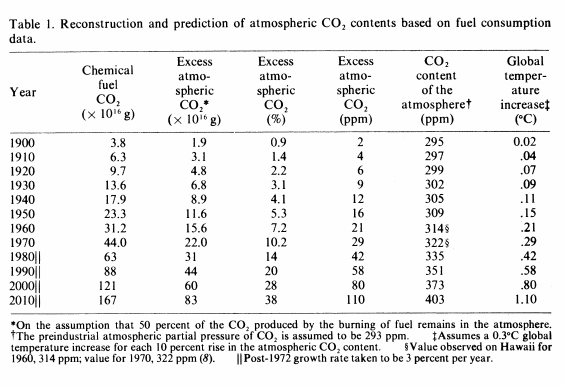 Broecker's projection for atmospheric CO2 in 2010, 403 ppm, was about 12 ppm too high. His assumption of a 50% absorption rate by the oceans was a little too low -- today it's thought to be about 60% absorbed by land and sea combined. And so his temperature change was a little too high as well; Broecker projected that 2010 would be 0.75°C warmer than 1975, whereas it's 0.68°C as measured by GISS and 0.63°C as measured by the Hadley Centre.

That, people, is pretty good.

Maybe Broecker got a little lucky. (But good people have a tendency to be lucky.)

Or maybe all this climate change stuff really isn't that complicated, and while it'd be nice for a big fancy global climate model run on an expensive supercomputer to spit out the exact year the last glacier in the Himalayas will disappear, and then wait a few decades for its confirmation to declare that the science is settled, it is hardly necessary in order to conclude that our large CO2 emissions are bound to bring a lot of warming and its attendant consequences.
Posted by David Appell at 10/05/2011 09:00:00 PM

A nice collection of editorials. Good to see these PIs move beyond traditional Rope-a-Dope or "The criticism wasn't in GRL, so instead of replying I concentrate on research" strategies.

I think that the year 1975 was remarkable in the history of understanding of global warming. But I consider that really important achievements of the year was the following two.

Manabe and Wetherald's paper, published early in this year (and referred to by Broecker) which showed the results of CO2-doubling in a three-dimensional climate model, essentially confirming their results by a one-dimensional model published in 1967. This marked beginning of an era of numerical simulation of climate change.

Another is Schneider's paper (referred to by Broecker as a paper in press), which reviewed various estimates of the effect of CO2 doubling and discussed what seemed plausible. He included his own previous calculation (Rasool and Schneider 1971) but gave it a low weight, because he knew that part of its premise was inadequate. This is perhaps a seed of the attitude to communicate scientific consensus about climate change which prevailed since the establishment of IPCC.

Syukuro MANABE and Richard T. WETHERALD, 1975: The effects of doubling the CO2 concentration on the climate of a general circulation model. Journal of the Atmospheric Sciences, 32, 3 - 15.