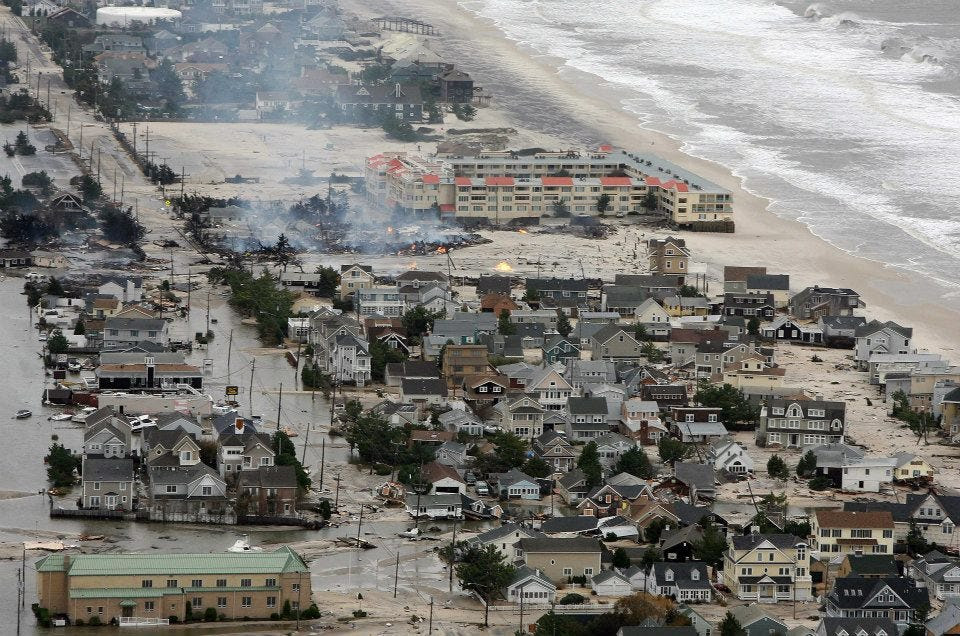 After seeing these aerial photographs of the Jersey shore, I need to revise my thinking a bit. As I wrote on Tuesday, "storms happen," but clearly this was an historically notable storm. When I worked for Bell Labs I lived on the shore -- a winter rental in Belmar, a girlfriend in Ocean Grove, and spent a lot of time at Seaside Heights, Stone Harbor, and elsewhere -- so it's easy to see the lives in these pictures, even if they're taken from a helicopter.

But big storms happen, too. 1972's Hurricane Agnes caused 128 fatalities and $2.1 billion in damages (in 1972 dollars). In current dollars that's $11.7 B. A Wikipedia article says Sandy is the second-costliest Atlantic storm, at $55 B, but when adjusted for wealth and population (as per Roger Pielke Jr), there are several that would appear to be higher (Sandy isn't (yet) on that list). Roger blogged it will likely be in the top ten.

The problem with blaming it on climate change is you have to then explain why earlier storms -- the New England Hurricane of 1938, the Great Miami Hurricane of 1926, the Snow Hurricane of 1804 -- happened anyway. And science cannot yet do that. So needless to say, neither can activists. (And lots of them are shamelessly trying, all coming from their individual biases.)

So you have to use statistical trends. And I don't see that they're there -- not for global hurricane frequency, or global accumulated cyclone energy (ACE), or global power dissipation index. Restricting one's view to the North Atlantic does show a trend, especially in ACE and tropical storms and major hurricanes. But then you have to explain why it's happening in the North Atlantic but not elsewhere on the globe, and why it's not natural.

The by-now standard argument of "was this climate change" is getting banal -- it happens with every storm. Activists clearly see storms as material to be harvested for propaganda. You get a lot of statements like this one in Nicholas Kristof's column today:


“You can’t say any one single event is reflective of climate change,” William Solecki, the co-chairman of the New York City Panel on Climate Change, told me. “But it’s illustrative of the conditions and events and scenarios that we expect with climate change.”

So you can't say anything based on this storm, but you can -- which Kristof then goes on to say. And, of course, such caveats are quickly forgotten as people blame the storm on climate change anyway. Andrew Revkin has been challenging these claims:


...there remains far too much natural variability in the frequency and potency of rare and powerful storms — on time scales from decades to centuries – to go beyond pointing to this event being consistent with what’s projected on a human-heated planet.

and is getting a lot of heat for it, like this from an engineer named Dan Miller:


We have increased CO2 levels in the atmosphere by about 40% in the last 100 years (mostly the last 50 years) on the way to doubling later this century. The Earth has warmed up about 0.8°C (1.4°F) already due to the extra greenhouse gases we put in the atmosphere and it would have warmed even more if we weren’t also putting up smoke that reflects sunlight. This warming has increased Earth’s energy radiation to space, but the excess greenhouse gases are still trapping more heat than the Earth is radiating to space. This “energy imbalance” is about 0.6 watts/square meter. This doesn’t sound like much but it is equivalent to 400,000 Hiroshima atomic bombs going off every day (see my briefing for the math).

Yes, all these are true -- but not one of them establishes this storm as due to climate change, or enhanced by climate change. Science just cannot do that yet (and, given the vast complexity of climate over a wide range of scales, it may never be able to do it, except in a statistical sense). The energy of a physical system such as a basic gas or fluid scales like the absolute temperature T, so its fractional energy shift ~ ΔT/T. If ΔT = 0.8 K for the surface temperature, ΔE/E ~ 0.003 (0.3%). That's still pretty small (and, granted, somewhat of a simplification of complex physical processes)....

As some scientists are trying to point out, climate change doesn't cause one thing or another, it augments what's already happening (at least, prior to an abrupt shift, which hasn't not happened (yet)). So the correct way to think about it is that all events now have a little AGW mixed in, which will be apparent as shifts in their bell curve -- but again, that's statistical, not individual.

Besides, while storms are spectacular and memorable, and can have an immediate impact on a region, I still think storms are a good way down the list of reasons to be worried about AGW. At top are (IMHO) declines in snowpacks and water supplies, droughts, and shifts in agriculture. Those will devastate entire regions far harder and more permanently than will any hurricane.

Yes, it is small.

T is higher in the tropics but severe storms are in the mid latitudes. Reason, delta T drives storms not T.

Here's a non-misleading way to have the discussion:

1) Explain that hurricanes are heat engines that only function when the sea surface temperature is above 26.5C.

2) Show the sea surface temperature chart for the period just before Sandy. You will note that there is a large patch of abnormally warm water in the North Atlantic, in the path of where Sandy was.

3) You will also note that there are lot more patches of warm water than cool. This graphically shows the "loaded dice".

Yes, of course. Natural delta T plus whatever (small?) influence AGW has.

The increment of damage from Sandy that can be attributed to sea level rise is nearly 100% attributable to anthropogenic climate change, after subtracting out a tiny amount of natural sea level rise.

So, how could Brutus kill Caesar if Lee Harvey Oswald killed Kennedy?

It seems to me that "hardening" of the electrical supply needs to be considered as an alternative to emergency repairs after a disaster strikes.

It seems the biggest problem is a lack of electricity in hard hit areas.

The effects of Sandy are impacts that we know will increase as we continue to increase the planetary energy balance: sea level rise, storm surge increase, heavy precip events, etc.

Whether or not the cyclogenesis or track of Sandy was impacted by AGW is an interesting question, but what we know in the here and now is that these are concrete examples of the impacts of AGW we know will happen. Causation is less important than illustrating impacts.

things: I am in no way saying that climate change doesn't hold immense threats. But I'm not on board with the notion, that many activists now have, that every storm that hits the US is due to climate change.