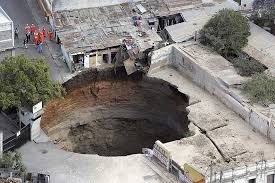 Discover has a news piece that claims global warming (in the form of higher atmospheric CO2 concentrations) is causing more sinkholes.


Increasing carbon dioxide in the atmosphere leads to rainwater containing higher levels of carbon dioxide, otherwise known as acid rain. When carbon dioxide in water is given a carbonate ion, it prefers to make bicarbonate ions rather than staying happily in the water minding its own business. Any rock or shell made of carbonate then becomes more at risk of dissolution as the ocean and rainwater become more acidic, much like tooth enamel dissolves away when soaked in a glass of soda pop.

Once the bedrock starts to dissolve and erode away, the type of surface sediment makes the difference as to whether the sinkhole will be catastrophic or not.

I just can't believe that a small change in rain acidity caused by higher CO2 is enough to make a difference in sinkhole formation (I would guess more rain would be a bigger issue, or local issues like drainage), or that if rainfall acidity is increasing, it wouldn't have been noticeable in many other places (forests, for one) like now.

I really don't want to have to lookup up the changes in pH or changes in weathering reaction rates, because this seems like obvious baloney. Anyone disagree?

Update: Discover links to this USGS page about sinkholes, which doesn't mention acidity but does say this about human induced sinkholes:


New sinkholes have been correlated to land-use practices, especially from groundwater pumping and from construction and development practices. Sinkholes can also form when natural water-drainage patterns are changed and new water-diversion systems are developed. Some sinkholes form when the land surface is changed, such as when industrial and runoff-storage ponds are created. The substantial weight of the new material can trigger an underground collapse of supporting material, thus causing a sinkhole.

The overburden sediments that cover buried cavities in the aquifer systems are delicately balanced by ground-water fluid pressure. The water below ground is actually helping to keep the surface soil in place. Groundwater pumping for urban water supply and for irrigation can produce new sinkholes In sinkhole-prone areas. If pumping results in a lowering of groundwater levels, then underground structural failure, and thus, sinkholes, can occur.

If, if, IF there was an extremely long drought, and water tables in a limestone aqufir fell drastically, one could eventually get sinkholes. That is what a Karst landscape is, after all.

And since drought has absolutely Nothing to do with global warming, 'man made' or otherwise, I'd have to say it was water usage, as per what you found elsewhere.

So you are correct to question the hysterics. Which you really need to do much, MUCH more often.

"And since drought has absolutely Nothing to do with global warming"

You're part of the problem.

is atmospheric pressure pressing down on the ground causing sinkholes