The Hockey Stick Gets a Much Longer Shaft

Science publishes a paper tomorrow by Shaun Marcott (of Oregon State University) et al that reconstructs Earth's surface temperature for the last 11,300 years. Here's one view of their results -- the purple line, with the blue band being the 1-sigma uncertainty -- and, for the last 2,000 years, comparing it to Mann's (et al's) results (in the gray): 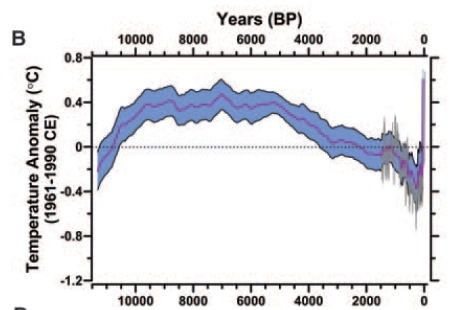 Andrew Revkin has great coverage, including a video interview with one of the authors and thoughts from Mann.

It sure looks like we ought to have be heading into another glacial period, doesn't it?

Update: From the press release:


"During the warmest period of the Holocene, the Earth was positioned such that Northern Hemisphere summers warmed more," Marcott says.

"As the Earth's orientation changed, Northern Hemisphere summers became cooler, and we should now be near the bottom of this long-term cooling trend--but obviously, we're not."

I guess I need RC before I decide what I really think, but... does it seem plausible to you that the 1-sigma uncertainty is so narrow, and so constant?

The graph is nonsense. It shows the Holocene maximum just after 10,000 years ago - at a time when most of Canada was covered with an ice sheet.

The ice sheet would have depressed global temperatures by several degrees, just as the 1990 IPCC report showed.

What evidence says Canada was covered in an ice sheet 10,000 ya?

The high albedo, latent heat of melting, and cold meltwater pouring into the sea would have combined to cool the earth dramatically. There is no way the Holocene optimum could have occurred more recently than 6,000 years ago.

What happened 150 years ago to cause an unprecedented rise in temperature? It certainly wasn't CO2.

No Jones doesn't. In the BBC interview he says,

"I would go along with IPCC Chapter 9 - there's evidence that most of the warming since the 1950s is due to human activity."

If you actually looked at data you'd have fewer misconceptions.

The HadCRUT4 data shows essentially no change in temperature between 1850 and 1910.

It then shows about 0.5 C of warming from 1910-1950. That was a period where solar luminosity was increasing by about 0.6 W/m2:
http://lasp.colorado.edu/sorce/tsi_data/TSI_TIM_Reconstruction.txt

When you include land use changes, you find that 25% of the carbon emitted to data came before 1950.

Yes he did. Most of the warming occurred prior to 1950.

Perhaps this plot of the actual data will help.

In other words, what Phil Jones said wasn't at all what you claimed.

And your graph is complete bullshit. A proper analysis of the complete HadCRUT4 data finds no warming or cooling between 1850-1900, 0.2 C of warming up to 1950, and 0.8 C warming to present.

Nearly everything you claim is wrong. You don't have an ounce of credibility. You're a waste of time. Get lost.

The graph maximum is consistent with the results of climate models that calculate the timing & extent of N.H. summer insolation.

Who G.A.S. what SteveG calls it?