The Very Opposite of a Eureka! Moment?


In what could go down as one of the great Eureka! moments in physics – and win somebody the Nobel Prize – scientists said Thursday that after a half-century quest, they are confident they have found a Higgs boson, the elusive subatomic speck sometimes called the "God particle."

Seriously, has any scientific discovery ever been milked strung out to such lengths? (Maybe the announcement of the sequencing of the human genome -- how many of those were there?) From Wikipedia:


Data collection at the LHC finally commenced in March 2010. By December 2011 the two main particle detectors at the LHC, ATLAS and CMS, had narrowed down the mass range where the Higgs could exist to 115–130 GeV. In addition, both experiments were starting to see hints of a new particle that could be the Higgs with a mass around 125 GeV [Dec 2011] It was therefore widely expected around the end of 2011, that the LHC would provide sufficient data to either exclude or confirm the finding of the Standard Model Higgs boson by the end of 2012, when their 2012 collision data (with slightly higher 8 TeV collision energy) had been examined.[13 Dec 2011] 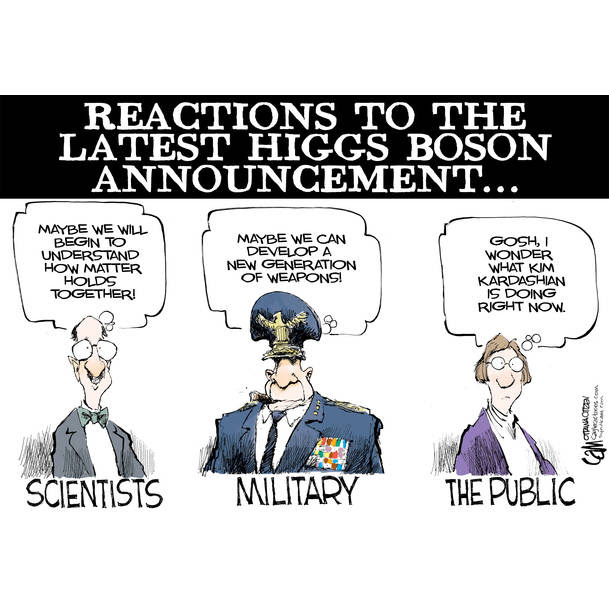 Frankly by this point, when it's finally confirmed, it's very anticlimatic -- it would have been more exciting if they'd concluded, no, that's not it at all. Never mind. Sorry.

I realize a lot was a stake: a Nobel Prize, the PR value of a major discovery in an age of diminished funding, the need to justify all the money that was spent on CERN, etc. Maybe in this day and age, when universities and national laboratories have more public information officers (PIOs) than there are journalists, and where insiders leak rumors to bloggers, hype of every detail, every sigma increase in uncertainty was inevitable.

But it seems to me to have been overdone -- the opposite of a Eureka! moment, which I associate with something instanteous like Newton getting clunked on the head with an apple, or at least something everyone wasn't expecting. (But then, why am I expecting scientific accuracy from The Huffington Post?)


Finding a Higgs more or less as expected is actually a bit deflating, Carroll said, because physicists had also hoped that an unexpected type of Higgs might open windows into yet more mysteries of the universe.

"Scientists always want to be wrong in their theories. They always want to be surprised," he said. "It's a bittersweet victory when your theory turns out to be right, because it means, on the one hand, you're right, that's nice, but on the other hand, you haven't learned anything new that's surprising."

(Except climate scientists never get that luxury, do they?)