Missing Energy Claimed to be Found

A paper just out in GRL by Balmaseda, Trenberth and Källén claims to have affirmed the location of the "missing energy" in the climate system -- it's (as suspected) in the deep ocean (the 300-2000 m layer, and especially below 700 m).

You can read the abstract here; this is from the paper's conclusion:


The deep ocean has continued to warm, while the upper 300 m OHC appears to have stabilized. The differences in recent trends among the different ocean layers are profound. The small warming in the upper 300 m is belied by the continuing warming for the ocean as a whole, with considerable warming occurring below 700 m. However, this raises the question of whether this result is simply because of the new Argo observing system? The results shown here suggest otherwise, although Argo clearly is vitally important quantitatively. Instead changes in surface winds play a major role, and although the exact nature of the wind influence still needs to be understood, the changes are consistent with the intensification of the trades in subtropical gyres. Another supporting factor is the uniqueness of the radiative forcing associated with global warming.

The magnitude of the warming trend is consistent with observational estimates, being equivalent to an average 0.47 ± 0.03 W m-2 for the period 1975–2009. There is large decadal variability in the heat uptake, the latest decade being significantly higher (1.19 ± 0.11 W m-2) than the preceding record. Globally this corresponds to 0.84 W m-2, consistent with earlier estimates [Trenberth et al., 2009]. In an observing system experiment where Argo is withdrawn, the ocean heating for the last decade is reduced (0.82 ± 0.10 W m-2), but is still significantly higher than in previous decades. The estimation shows depths below 700 m becoming much more strongly involved in the heat uptake after 1998, and subsequently accounting for about 30% of the ocean warming.

Here are some figures from the paper: 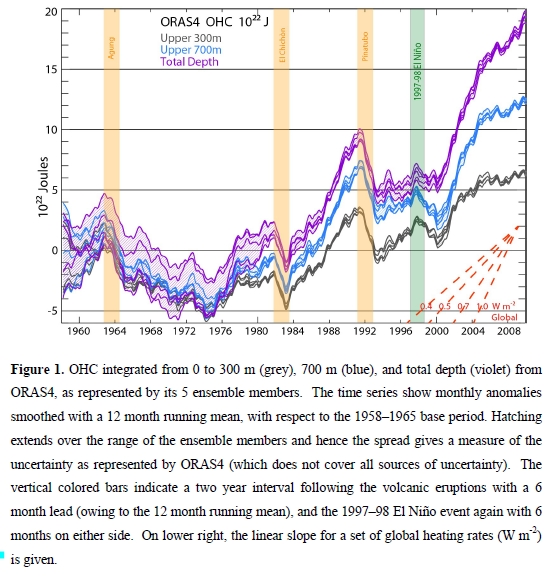 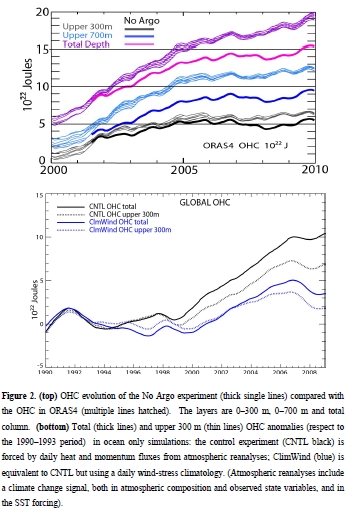 Finally, here is their summary of trends for the different layers over different times, which makes it clear why the surface temperature jumped up so much in the 1990s -- the ocean was actually losing energy (heat), mostly because of the big 1997-1998 El Nino -- and why it's been on "haitus" during the last decade -- the ocean took up a huge amount of heat, at a rate far higher even than in the 1980s, with most of it going below 700 meters.

Why are you pretending not to understand why the impact of heat sinks such as the oceans on the energy balance at Earth's surface over at DITC?

The missing energy in N&K is of a far different scale (150 W/m2) than of the "missing energy" that is commonly talked about with respect to recent climate change, which is a fraction of a W/m2.

N&K don't have any "Missing Energy". They are applying thermodynamics rather than "Radiative Transfer Equations".

As in "Cool Hand Luke", what we have here is a "failure to communicate".

That 150 W/m2 "missing energy" is something you invented. It has no relevance to reality.

That's the whole point: radiation is involved, so applying just thermodynamics is insufficient.