A Bulletproof Vest for Each Senator? 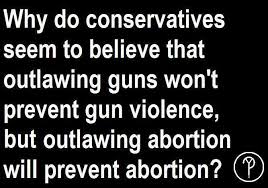 This sounds like a parody, but no, it's only America:

US schools weigh bulletproof uniforms: 'It's no different than a seatbelt in a car'
As gun control legislation grinds to halt in Washington, parents and teachers are taking matters into their own hands

Some parents are now outfitting their small children with bulletproof backpacks. And classrooms are doing the same:


Barry Tull, headteacher of Worcester Preparatory School in rural Maryland, has 80 ballistic shields deployed in his classrooms disguised as whiteboards and clipboards. Some teachers use them to assign homework, others lean them up against the wall, but most of Worcester's middle and high-school children know what they are for.

In honor of the recent shameless Senate vote against expanded background checks -- even though 90% of the public approved of them -- someone ought to do a Kickstarter campaign and raise about $25k to send one of these backpacks to each Senator who voted no.

Or, at least, a bulletproof vest for each Senator who voted against this bill. Maybe then they'll think twice about the violent culture Americans now find themselves living in, where gun homocide rates are 10 time higher than in Europe.