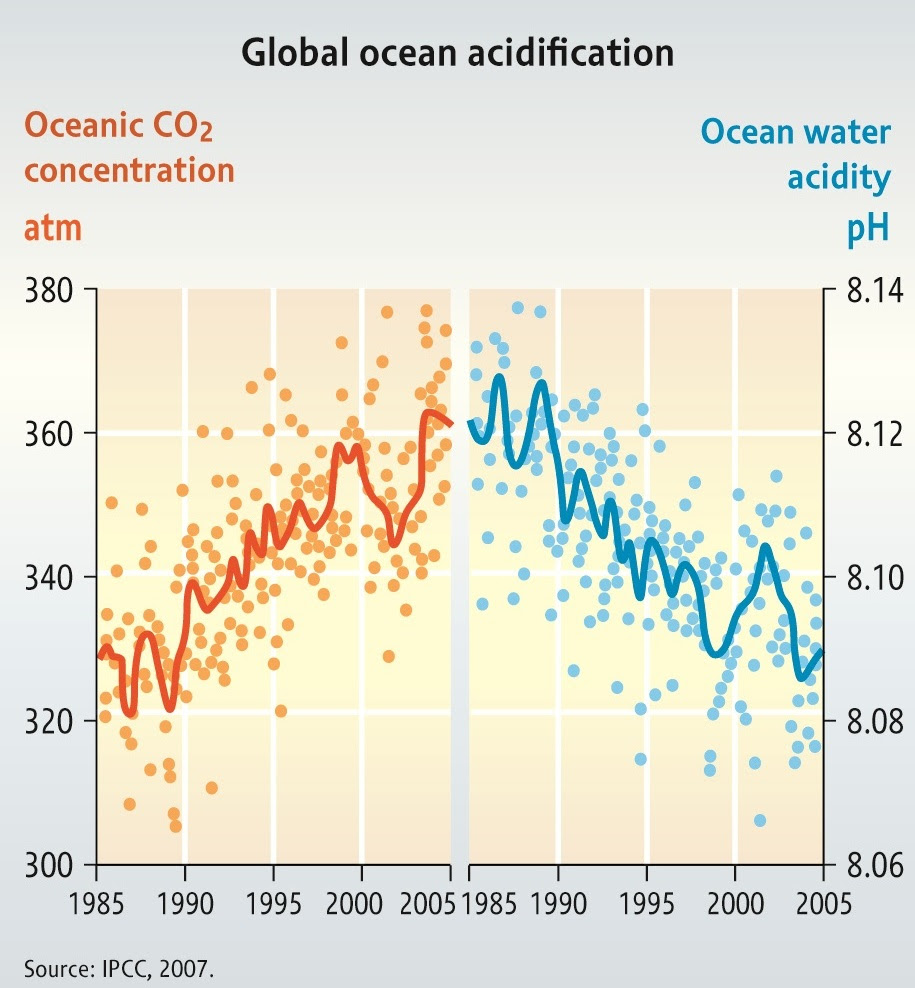 The Center for Biological Diversity is suing the EPA -- again -- for failing to halt ocean acidification in the Pacific Northwest.

CBD is a private, membership environmental organization (625,000 members) based in Tucson. They sued the EPA for the same thing back in 2009, and the EPA agreed with them and said it could address ocean acidification under the Clean Water Act.

But the EPA hasn't done much since, so CBD is going in again.

Why the Pacific Northwest? The CBD writes:


Since about 2005, shellfish hatcheries in Washington and Oregon have experienced massive die-offs of oyster larvae with losses of up to 80 percent of production. Oysters are failing to reproduce in Willapa Bay, Wash., and, elsewhere, corals are growing more sluggishly, while some plankton have thin, weak shells.

But why is this problem particularly bad off the coast of the Pacific Northwest? Mostly because of upwelling deeper water, as surface water gets pushed from shore. Chemical and Engineering News wrote recently:


In the Pacific Northwest, the problem of ocean acidification is especially bad for several reasons. One reason is that prevailing winds push surface waters away from the coast, causing a local upwelling of carbon-rich water from the deeper ocean to the surface. This upwelled water is naturally rich in nutrients, is high in CO2, and has low pH. But now, the upwelled waters are also carrying an ever-growing load of human-generated CO2 picked up from the atmosphere 30 to 50 years ago when the water was last in contact with the atmosphere. As a result, deep water today is more corrosive than ever to shell-building organisms such as oysters, clams, scallops, mussels, crabs, abalone, and pteropods (small sea snails eaten by fish and other marine life).

A separate acidification process is under way in the vast expanse of Puget Sound, just as in other estuaries along the world’s coastlines. Runoff from farms, storm sewers, and urban pollution flushes organic carbon and other nutrients into estuaries that are nurseries to growing shellfish. These nutrients fuel blooms of marine algae, which then die, fall to the bottom, and during decomposition result in more CO2 being released to the water. In the air, emissions of nitrogen and sulfur oxides from factories, cars, and power plants are yet another source of nutrients that cause blooms that lead to more acidic waters.

The chemical soup resulting from all of these acidification processes has made both Puget Sound and the Washington coastal area among the most acidic water­ways on the planet, according to Jan Newton, senior principal oceanographer at the University of Washington’s Applied Physics Laboratory.

The Seattle Times had a nice multimedia presentation on OA last month, that looks at the whole food chain in the ocean.

Of course, there's only so much the EPA can do to curtail ocean acidification, since it can only regulate US emissions (which, let's face it, aren't going to zero anytime soon). So the CBD's lawsuit seems more to bring attention to the problem than anything else.

A press release sent out yesterday by Oregon State University was pretty blunt about it all: Study concludes climate change will wreak havoc on oceans by 2100


A new study looking at the impacts of climate change on the world’s ocean systems concludes that by the year 2100, about 98 percent of the oceans will be affected by acidification, warming temperatures, low oxygen, or lack of biological productivity – and most areas will be stricken by a multitude of these stressors.