Are Large Artic Melts Causing Part of the Hiatus?

Update 3/3/14: I just noticed that the table below contains a spreadsheet error. The top number in yellow (avg) should be 42°C; the stdev stays the same. So the data is showing just slightly cooler global temperatures, but with more variation.

I am intrigued about Judith Lean's hypothesis that large summer Arctic sea ice melting is affecting global winter temperatures, which I wrote about for YFCC&M here, and which Lean described for me in this short interview.

So I looked at HadCRUT4 seasonal temperature anomalies, comparing them to the previous year's decline in Arctic sea ice extent, and there does seem to be some correlation: 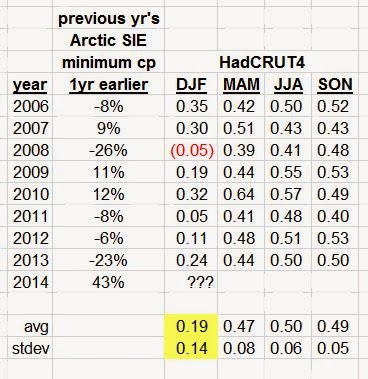 Winter average global temperatures are lately running far below those of other seasons, and seem somewhat correlated to the previous year's September melt.

I'll have to calculate more numbers, but there does seem at least the possibility that some negative feedback is suppressing global average temperature compared to what they would be otherwise, which might be a portion of the hiatus.