Kitten Sneezes Are Worse Than Hiros! 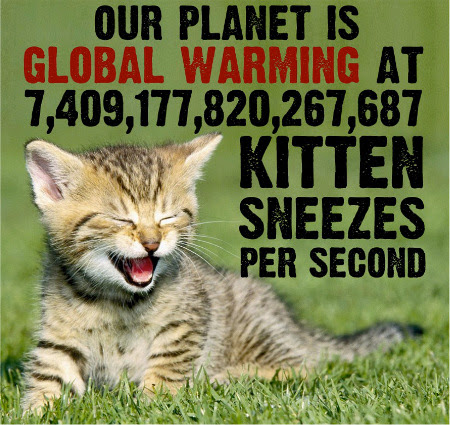 Now the inhumanity has devolved into cat-hating as well.

In the face of intense criticism, John Cook put forth at the AGU meeting a unit for those who prefer a "cuddlier" figure for the amount of heat trapped by global warming -- the "kitten sneeze."

That amount, 4 Hiros/second, is 4*63 Terajoules/s, so one kitten sneeze (KS) is apparently

However.... That's a brutal number of sneezes per kitten, as I will now prove.

There are 95.6 million cats in the United States, which works out to 0.30 cats per American. (Frankly I think it ought to be crime for anyone to own keep just a third of a cat, with a serious punishment for violations, but maybe that's just me.)

While it's unlikely the world-at-large has as many cats per capita as does the U.S., this figure doesn't include feral cats, wild cats, lions or tigers, so let's take it as the world average. With a global population of 7.13 billion people, the number of estimated cats on the planet is 2.15 billion.

Domestic cats live about 16 years, and are kittens for roughly 6 months. So right now there are about 67 million kittens on the planet.

Thus, each kitten would have to sneeze 110 million times a second to equal the amount of heat trapped each second by global warming.

I'm sorry, but any kitten that sneezes 110 million times a second is not going to last more than a few microseconds, and that's just cruel.

So instead of the insensitivity and inaccuracy of comparing global warming to the horrific death and destruction of a major world city and its inhabitants, Cook is comparing it to the near-instantaneous vaporization of millions and millions of the cutest beings on the planet, bar none.

This isn't an improvement an all -- a unit that imagines the wanton mass destruction of the world's entire population of innocent kittens is perhaps the only unit that is worse than the Hiro.

Sorry, almost same problem with Hiroshimas per second. :) There are not enough nukes for such a carpet bombing campaign.

"So intead (sic) of the insensitivity and innacuracy (sic) of comparing global warming to the horrific death and destruction of a major world city and its inhabitants..."

Please get back to us when Cook does that - when he actually says something along the lines of "Global warming is causing human suffering at a rate equivalent to x Hiroshima bombings per unit of time y.". Until then, as you said yourself "The Hiro is an useful energy unit when discussing global warming, and I've certainly used it in the past...".