Why, Once You Start Geoengineering, You Can't Stop 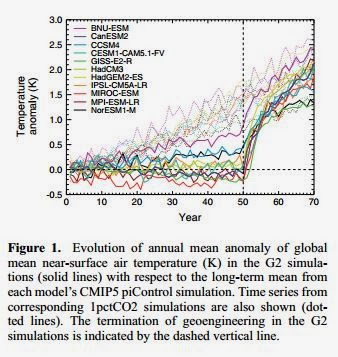 One of the criticisms of geoengineering via solar radiation management (SRM) -- such as putting small reflective particles into the upper atmosphere -- is that once you come to rely on it to stop global warming, you are stuck doing it forever.

A recent JGR paper by Jones et al shows how fast temperatures return to the pre-geoengineering trend -- just a decade or two.

The top figure to the right are the results of 11 climate models where 50 years of SRM geoengineering to counter a 1% per year increase in CO2 concentrations was halted after the 50th year. In the first decade after stopping, temperatures shot up by up to 1.5°C, and over 2.0°C over 20 years. 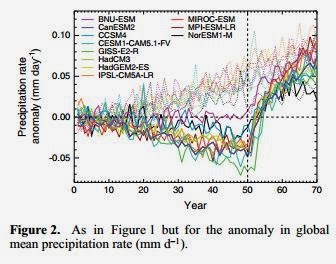 The second figure is for precipation under the same scenario.

Of course, this would be a disaster for lots of species, who are going to have a hard enough time keeping ahead of gradual warming, by heading (if they can) toward the poles or higher in elevation. In this picture they'd see no reason to migrate for the first 50 years, then be stuck when temperatures spiked upward.

Not only that, but we'd be creating a high-CO2, low-temperature world, the likes of which Earth and its ecosystems have never, ever experienced.

It's unlikely our descendants are going to appreciate the never-ending geoengineering project we could commit them to. In fact, probably no generation in the history of mankind is going to be as reviled as much as ours will be, for having known about the dangers of manmade climate change but choosing to do nothing about them. I wonder what they will call us -- "heedless" seems far too kind.

"It's unlikely our ancestors are going to appreciate..." You mean descendants.

The patients are running the asanesylum.