The Hadley Centre's Central England Temperture (CET), 356 years long, is at a record high for year-to-October: 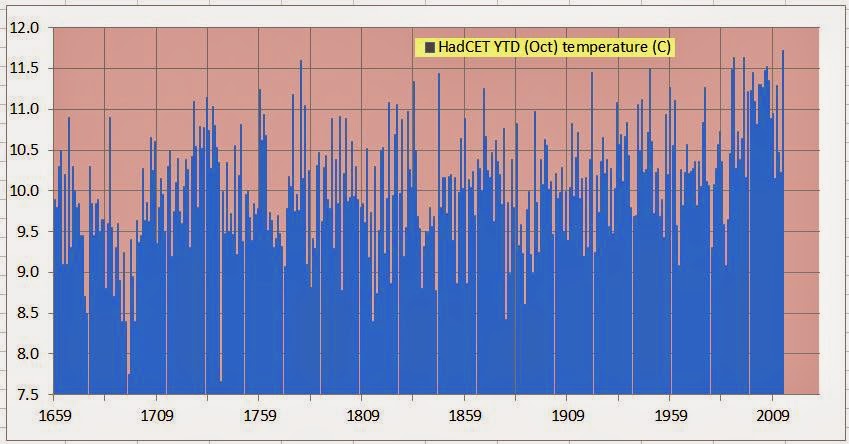 The Hadley Centre says it is "the longest instrumental record of temperature in the world.... The mean daily data series begins in 1772 and the mean monthly data in 1659.... These daily and monthly temperatures are representative of a roughly triangular area of the United Kingdom enclosed by Lancashire, London and Bristol. The monthly series, which begins in 1659, is the longest available instrumental record of temperature in the world."

Isaac Newton was only 16 years old when CET recordkeeping began (though not by him).

Here's their graph as anomalies; I guess the green bar is 2014 year-to-date:

I'm sure it's just a coincidence that almost all its the warming in the last 356 years has come in the last century, and in fact since 1975.

Beware, though, that the 15-year trend is -0.35°C/decade, which obviously means we're entering an unprecedented global cooling era probably because the Sun has given up on Earth for now and is busy warming Mars, so filthy liberals can blame humans (and their robots) for climate change there, too.

The soon-to-arise environmental group warning about global warming on Mars will be named 953000.org.

I hope that you are aware that the Central "England" Temperature between 1706 and 1722 was measured in The Netherlands.

Not entirely. According to this paper (pg 317) it also included "noninstrumental weather diaries."

And from 1723-1760s observations were taken in unheated rooms, not true outdoor settings, and that no daily series can begin "before about 1770."

The don't remains the same, across two continents, as you are well aware, despite the silly alarmist graphing conventions: