The Growth in Ocean Dead Zones

Ocean dead zones -- warmer regions that hold less oxygen -- are increasing worldwide. This summer the Gulf of Mexico dead zone was 5,000 square miles along the Louisiana coast, and it's estimated to cost $82 million in lost tourism and lost fish catch. The second largest US dead zone is off the coast of Oregon -- low-oxygen water that's been appearing every summer since 2002, perhaps tied to global warming.

There are 166 dead zones in US waters alone.The number is rising worldwide, according to a great article about them, "Devil in the Deep Blue Sea" by Brian Palmer:

[Those are decades along the horizontal axis, and "cumulative number of systems" along the vertical axis. Lots more interesting information in the article.]

Dead zones are caused by runoff of agricultural fertilizers, sewage around Africa and South America, and airborne nitrogen, the latter coming from cars, trucks, and coal-burning power plants in the Midwest. These particularly affect Chesapeake Bay and Long Island Sound. Chesapeake Bay has several dead zones, each where a river drains into the Bay.

Don't miss reading about London's Great Stink of 1858, which brought the city to a standstill.

More from the article: 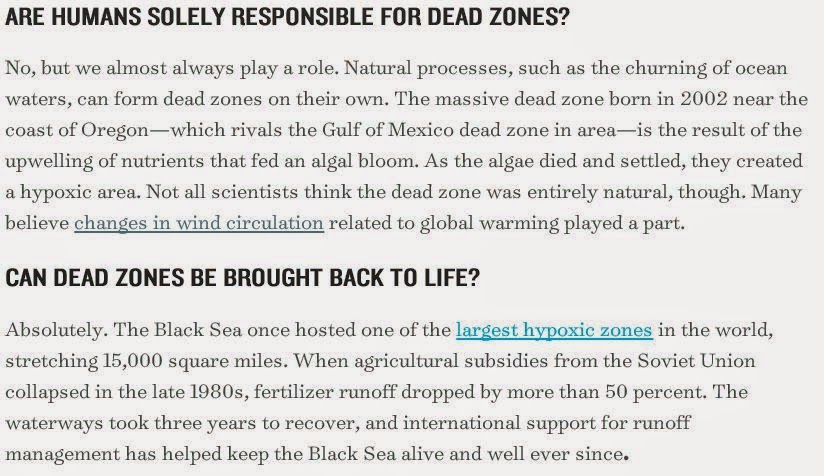