Remember this model-observation comparison in the 5AR? (Sure you do.)

Ed Hawkins recently tweeted (twote?) an update as of October 2014: 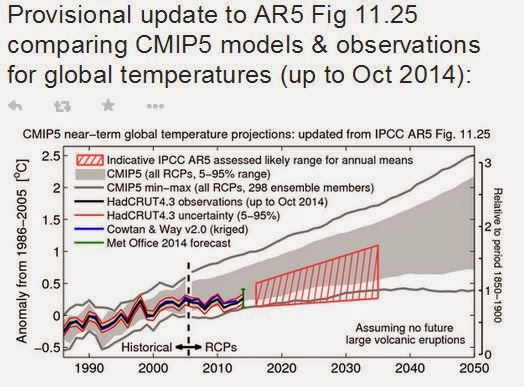 Now the observed temperatures are inside the 5-95% confidence band...barely.... But until the PDO changes its phase (which is currently negative), it's probably premature to rule out agreement at the 95% C.L.... (Of course, then people will argue about the influence of the PDO.) (And the surface stations, which have been good enough to show a hiatus, will again be claimed to be faulty, bet'cha.)

I don't see CO2 ever regaining its innocence -- which is what I think a lot of pseudo-skeptics think is going to happen...any day now....