What I Learned Yesterday About the Word "Denier"

Some people who are called "climate deniers" take umbrage at the label -- they think they are being compared to Holocause deniers.

Some people who deny the evidence for AGW are happy to be called "deniers."

I don't have a problem with using the word, because "denier has a very relevant defintion before climate change happened, and before the Holocaust happened: "one who denies." It was first used in the 15th century, according to Merriam Webster.

And some don't have any problem complaining about the word while themselves throwing around the term "global warming Nazis."

So it's a useful word in the English language, applied to people who don't seem susceptible to reason anyway, and no one has the right to tell users of the language what certain words mean or how and when they can be used.

But get this -- the umbrage completely ignores some very relevant historical context.

Yesterday at the AGU meeting in San Francisco, Ben Santer spoke about his experiences following his Convening Lead Authorship of Chapter 8 of the the IPCC's Second Climate Assessment, on "Detection and Attribution."

As you may know, Santer was the subject of brutal and false accusations by (especially) Frederick Seitz, who was president of the National Academy of Sciences in the 1960's and who co-founded the George C. Marshall Institute in the 1990s. Wikipedia:


"A week after the report was released, The Wall Street Journal published a letter from the retired condensed matter physicist and former president of the US National Academy of Sciences, Frederick Seitz, chair of the George C. Marshall Institute and Science and Environmental Policy Project. In this letter, Seitz criticized the IPCC report, in particular the conclusions of Chapter 8. Seitz wrote that "key changes were made after the scientists had met and accepted what they thought was the final peer-reviewed version." He said that the deleted passages removed "hints of the skepticism" with which many scientists regard claims about global warming, and called this "a disturbing corruption of the peer-review process."

Seitz's op-ed for the WSJ is here, and a followup letter can be found here. In between was a reply from a long list of scientists, with Santer first. (Fred Singer also added his venom in a second letter.) Santer said he spent a year and a half of his career responding to these attacks, which included threats made against his family.

In fact, a few weeks before the Seitz letter, the oil industry front group Global Climate Coalition (GCC) had made the first accusations, as Paul N. Edwards and Stephen Schneider wrote in 1997:


The WSJ op-ed was not the first time charges of suppression of scientific uncertainty in Chapter 8 had been aired. On May 22 [1996], a few days before the Seitz op-ed appeared, the small journal Energy Daily reported the same allegations in considerably greater detail. The Energy Daily article also reported their source: a widely circulated press release of the Global Climate Coalition (GCC, an energy industry lobby group).

In its June 13 issue, the prestigious science magazine Nature also reported on the GCC allegations. The Nature report, unlike the Seitz and Energy Daily articles, included explanations of the revision and review process from Santer and the IPCC. Under the hot-button headline “Climate report ‘subject to scientific cleansing,’” an accompanying editorial argued that the GCC analysis was politically motivated and generally false. But the editorial also noted that the Chapter 8 changes may have resulted “in a subtle shift... that... tended to favour arguments that aligned with [the SAR’s] broad conclusions."

What else what going on in the mid-1990s? The Bosnian War. Which included the (true) accusations of "ethnic cleansing," a term that has been around since at least 1914 and the Balkan Wars.

And in fact the term "racial cleansing" was used in pre-War Hitler Germany. Wikipedia:


Eugenics researcher Harry H. Laughlin often bragged that his Model Eugenic Sterilization laws had been implemented in the 1935 Nuremberg racial hygiene laws. In 1936, Laughlin was invited to an award ceremony at Heidelberg University in Germany (scheduled on the anniversary of Hitler's 1934 purge of Jews from the Heidelberg faculty), to receive an honorary doctorate for his work on the "science of racial cleansing". Due to financial limitations, Laughlin was unable to attend the ceremony and had to pick it up from the Rockefeller Institute. Afterwards, he proudly shared the award with his colleagues, remarking that he felt that it symbolized the "common understanding of German and American scientists of the nature of eugenics." 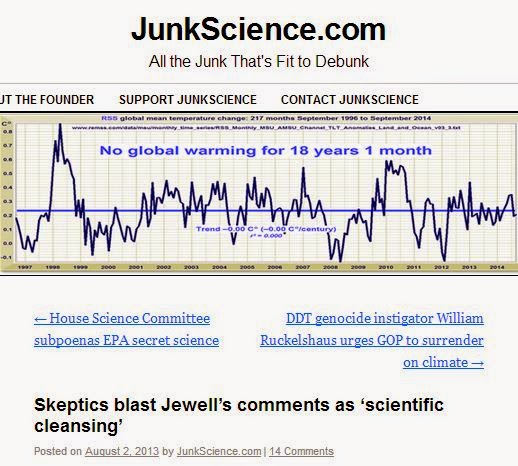 So you know what would immediately come to mind in the mid-90s when Santer and the IPCC were accused of "scientific cleansing."

This term continues to be used to this day (right). See also here.

So if you're a quote-unquote skeptic who doesn't like the word "denier" because you think it is an unfair reference to deniers of the Holocaust... well, how about first casting the speck out of thine own camp?

I have given this a great deal of thought and skeptic is certainly the wrong term, since any good scientist should be happy to be labeled as one.
Denier is the best term for most of these folks, and poorly or miseducated, for a minority of the rest.

Dan: I think you're right. People who aren't amenable to data and basic reason can't be considered "skeptics."

Words are re-purposed all the time and words that had one meaning in the 15th century like say "gay" can have an entirely different usage in a modern context. The use of the term "denier" in the context of Holocaust denial only came to the fore in the last 30 years or so but did so through the concerted effort of hundreds of thousands who wanted to create a label that aptly described the phenomenon. As someone who fought anti-semitism and true "denial" back in the 1980's and 1990' your ahistorical perspective is a clear indication that you should stick to climate and away from etymology. The term "denier" was chosen for use in this field BECAUSE of the efforts to make a denier an outcast based entirely on its use in the context of Holocaust denial. If you want a term "pseudo-skeptic" or put the intellectual effort into re-purposing a word of your own. This one is taken.

Collins Dictionary — "a person who denies"

Dictionary-dot-com — "a person who denies"

The Free Dictionary — "One that denies; a denier of harsh realities"

Free Merriam-Webster — "one who denies"

Oxford Dictionaries — "A person who denies something, especially someone who refuses to admit the truth of a concept or proposition that is supported by the majority of scientific or historical evidence: a prominent denier of global warming; a climate change denier"

WordReference-dot-com — "a person who denies"

Your Dictionary — "Denier is defined as someone who refuses to admit something."

Lastly, the Oxford Dictionary of Current English (Oxford University Press, 1998) defines the verb "deny" thus: "1 declare untrue or non-existent. 2. repudiate or disclaim. 3 (often foll. by to) withhold (a thing) from (denied him the satisfaction; denied it to me)"

Of course, there is an alternate usage (accent on first syllable). The UK shop MyTights puts it this way: "Technically denier relates to the weight (i.e. thickness) of the yarn from which hosiery is woven, (in case you are interested, 1 denier means that 9,000 meters of yarn weighs 1 gram). Generally the lower the denier, the sheerer the appearance and the more fragile the tights."

So, then, a bigger denier means a denser yarn. Sounds fine to me.

Chris, you are quite right the number is in the range of 100s to 1000s and that is me typing poorly. As for use of the dictionary "gay" still says happy and many other terms that have a common usage are not represented in the dictionary with their common interpretations.

Finally as for a denier (the measurement)that is a french term and has an entirely different pronunciation (almost the same as the french pronunciation of last) and would never be mistaken for a word with a root of deny.

You parried my snark deftly; points for that.

However, all the dictionaries I looked at included "homosexual" as one definition of gay, along with the older definitions. It is the job of dictionary writers, after all, to keep up with changes in the language.

Regarding "de-NI-er", I won't budge: that word has no exclusive tie to the Holocaust. I guess we'll have to agree to disagree.