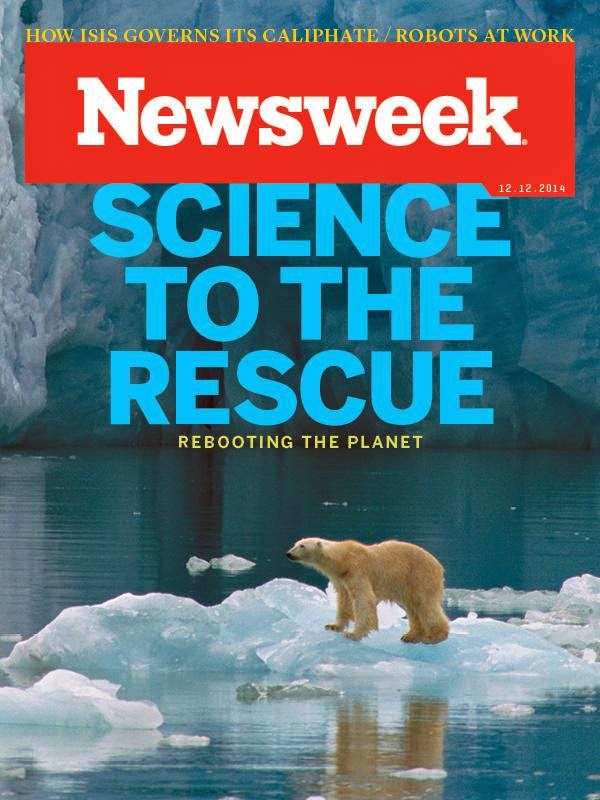 Newsweek's cover story this week is about geoengineering: "Science to the Rescue: Rebooting the Planet."

That is a very unfortunate headline. Because it's wrong. Because a geoengineered planet, if we do that, would be nothing like the planet we had before AGW.

It is not a "reboot," where the planet comes back as it was before (before the Industrial Revoltion), and we start over. That leaves Newsweek's readers thinking about geoenginnering, not in its realities, but as constructed by the Newsweek authors and editors.

Geoengineering, whether by Solar Radiation Management (SRM) or Carbon Dioxide Removal (CDR), does not give back the Earth's pre-industrial climate.

If we do Solar Radiation Management (SRM), blocking some of the Sun's rays by injecting aerosols in the upper atmosphere, mimicking a volcanic eruption, we end up with a low-temperature, high-CO2 world that has no parallel in Earth's history. No one really knows what that entails.

We would commit ourselves, and all future generations, to SRM forever. As soon as it is stopped, the world would very quickly -- in a decade or two -- revert back to its natural state -- warmer as CO2 gets higher. And it may well ruin things like the annual, expected, needed, important monsoon in India. Indians are not going to like that.... and their complaints, whether causally true or not, will be very difficult to dismiss.

Removing CO2 from the atmosphere doesn't really work either. That is, no one has yet demonstrated any idea that would remove more than about 10 percent of the annual CO2 we emit to the atmosphere. Sucking it out is expensive, ~$50 per tonne, at least so far. And then there is the question of where do you put the CO2 you've removed? Pipelines, geology.... And what if it leaks, something like the 1986 CO2 natural outgassing of Lake Nygos in Cameroon that killed 1,700 people?

Do you want to live atop a billion tonnes of carbon dioxide?

So with CDR you have to be very careful, and very, very vigilant.

Neither of these options amounts to a "reboot." They both amount to a mess, and I can't imagine any future generations want this mess dumped in their laps when they turn 18. Welcome to the World!, the world says. You're finally an adult. Now here's what you gotta do. NOW.

"That is a very unfortunate headline. Because it's wrong. Because a geoengineered planet, if we do that, would be nothing like the planet we had before AGW.

Is a planet that spends brief interglacial periods between ice ages desirable?


" And then there is the question of where do you put the CO2 you've removed? Pipelines, geology, month. And what if it leaks, something like the 1986 CO2 natural outgassing of Lake Nygos in Cameroon that killed 1,700 people?"

How about Antarctica? Freeze it and insulate it.

Yes, that's an interesting idea -- freeze atmospheric CO2 at Antarctica.... Except it takes a lot of energy; this says it would take a good deal of infrastructure....
16 wind farms per billion tons CO2 per year.

Another interesting question.... We could easily geoengineer ourselves out of the next (and future) ice age(s) -- I think it only takes CO2e levels of around 300-320 ppm. I think James Hansen said it would only take a few decent sized CFC plants....

The trouble is, if that was our goal, we have already wildly overshot the mark and are creating enormous *other* problems.... And we had centuries (if not millennia) to decide this, with (presumably) much, much better science available to us then than we do now.