Is it Fair to Now Blame China for Climate Change?

Perhaps in advance of the Paris conference this December, a spate of articles came out in the last few days claiming that "China to surpass U.S. as top cause of modern global warming." Is that fair? (No.)


(Reuters) - China is poised to overtake the United States as the main cause of man-made global warming since 1990, the benchmark year for U.N.-led action, in a historic shift that may raise pressure on Beijing to act.

China's cumulative greenhouse gas emissions since 1990, when governments were becoming aware of climate change, will outstrip those of the United States in 2015 or 2016, according to separate estimates by experts in Norway and the United States.


"A few years ago China's per capita emissions were low, its historical responsibility was low. That's changing fast," said Glen Peters of the Center for International Climate and Environmental Research, Oslo (CICERO), who says China will overtake the United States this year.

Here's data on US and China cumulative emissions since 1990: 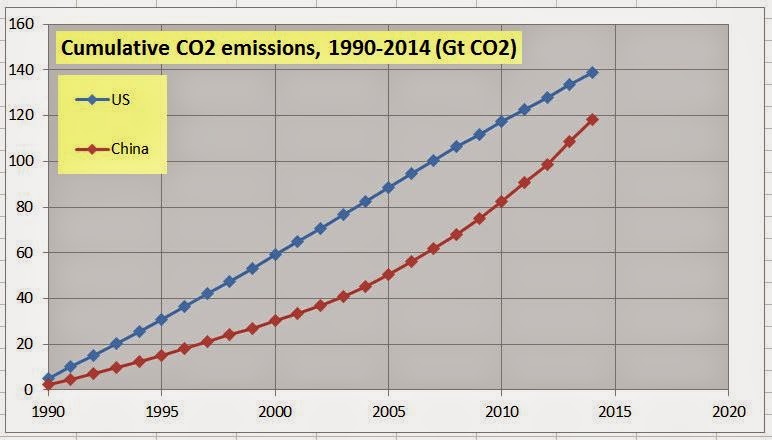 Yes, by this measure China will surpass the US by about 2016.

But, of course, the climate doesn't care about your silly accounting choices and conferences, it only knows how much CO2 is in the atmosphere. And the US has emitted a lot more CO2 over the last century than has China. Since 1900, the comparison comes out very nicely if you take the ratio of cumulative emissions: 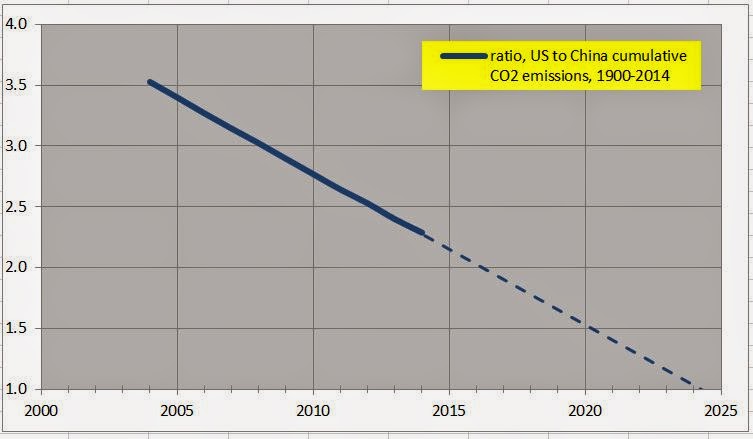 And in 2012, 16% of China's emissions went to products exported elsewhere (not sure of this number for the US).

Many like comparing national emissions, but it's not like an American has some exceptional right to emit CO2 that a Chinese citizen does not. We're the world's energy hogs, not them. And China's one-child policy probably did more to reduce emissions than all of the Kyoto Protocol.

(In James Hansen's book he writes that it's actually the UK that has the highest historical per capita emissions, but IIRC doesn't provide a source for that.)

So I don't think it's fair to start blaming China for global warming -- not even by 2025, when their cumulative emissions are projected to pass the US's (see above). But that seems like what some are trying to do already.