UAH just changed their data model from version 6.0 beta 2 to beta 3. (The beta 2 data no longer seem to be available, but I have a spreadsheet.) Some of the changes are signficiant, so it seems their new model has not settled down yet to a publishable version.

Personally I suspect most people would prefer to see the changes when their methodology is published, like Karl et al recently did. What's the point of putting out a new version of the data that's not stable and not explained in a journal paper?

Until UAH explaining them in a published paper, so we really ought not to be putting any stock in them, like using them to claim a 20-year pause or whatever. Until the data stabilize and the methodology is published with some peer review, all we can do it take the numbers of faith. (Of course, people like Monckton and Tisdale don't care about the numbers if they like them or how they compare to the numbers they don't like, they just want to put out their propaganda.)

Here is a summary of some of the changes (beta3 - beta2) for the lower troposphere, by region: 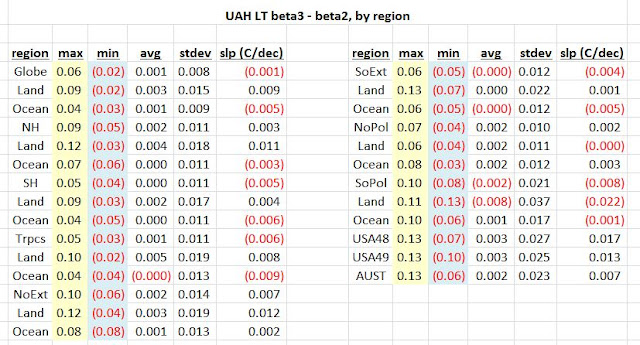 Here are the month-by-month changes for the global numbers, again the beta3 numbers minus beta2 numbers:

So most of the changes are for the last 10 years.... Despite some being sizeable, the long-term and short-term trends haven't changed much at all:

I haven't looked at changes to the data for any atmospheric region but the lower troposphere.