Kevin Trenberth Says Yes, There Was a Hiatus 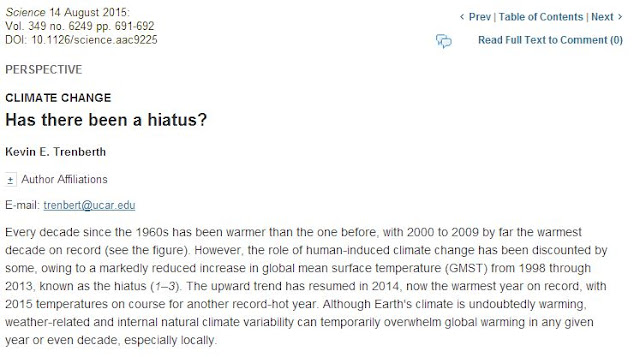 Trenberth writes that the recent Karl et al paper skimped on trends by using 1950 as a starting date: 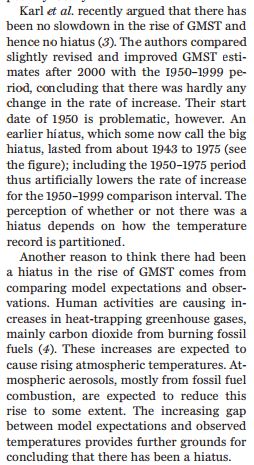 and notes that global surface temperature rises in a step-by-step fashion instead of a monotonic increase: 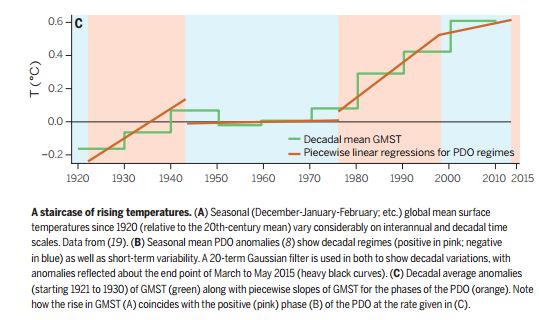 and that, now that the PDO (Pacific Decadal Oscillation; data here) has flipped to its positive phase, we may be stepping up again.


"There is speculation whether the latest El Niño event and a strong switch in the sign of the PDO since early 2014 (see the figure) mean that the GMST is stepping up again. The combination of decadal variability and a trend from increasing greenhouse gases makes the GMST record more like a rising staircase than a monotonic rise. As greenhouse gas concentrations rise further, a negative decadal trend in GMST becomes less likely (13). But there will be fluctuations in rates of warming and big regional variations associated with natural variability. It is important to expect these and plan for them."

Which means, I guess, that after this temperature step increase levels off, we get to do the hiatus all over again. Deniers, save your posts for reuse.
Posted by David Appell at 8/13/2015 01:45:00 PM

In summary, the "hiatus" is in the RATE of temperature increase NOT of increase itself.
Temperature from 1998 to 2014 rose less rapidly than it had from the mid 1970's until 1998.

That is, there has been no stop to the temperature rise nor decrease in temperature.

Did I state this accurately?

It does seem that there is a roughly 60-year cycle superimposed on the general rise in temperatures. From GISTEMP, 30 year trends:

In each successive cycle, the "cooling" half gets weaker and the "warming" half gets stronger. Note that the current half-cycle (since 2000ish) is supposed to be a "cooling" half but we're now at the point where that is swamped by forcing from greenhouse gases. Woe betide us in 2030ish when the cycle flips to a warming phase that amplifies rather than suppresses the GHG forcing....

Or maybe not. It's foolish to diagnose a cyclical pattern based on just 2.5 complete cycles in a noisy data set, and there's no real physical explanation, just armwaving.

It'll be interesting to see what happens after the current El Nino ends.

John: Yes, I think that's right. I suspect Trenberth would point out it depends on what interval you're measuring over -- trends can sometimes be negative for shorter intervals (~ a decade), due to natural variability.

David: yes, I understand the issues of noisy data and sub-interval counter trends within the overall trends.

My question: is Trenbeth's "hiatus" the same as that of the denialists?
That is, has the massive addition of unneeded "hot air" simply been about a reduced rate of increase all along?

How about "reflagration" and "fucking whopper," respectively.

I hope my contempt for word games is apparent. I can't decide if Trenbeth playing the denialist game, whether by accident or on purpose.

Thanks for being able to do what nobody else apparently can manage, which is to primarily just report on what Trenberth actually wrote.

John: From what I can tell, the deniers are now focusing on the "hiatus" in the temperature of the lower troposphere.

According to the RSS and UAH data, it hasn't warmed in about 20 years.

At least, with the new UAH data, which differs significantly from their prior version. It's kinda puzzling, though to me it's starting to look like a serious problem for the models UAH and RSS use to convert microwaves into temperatures. That requires a host of corrections, like for decaying satellites and instrument calibration and instrument warmth.

Deniers prefer to ignore surface warming and ocean warming, and talk only about the RSS and UAH numbers.

Yes, now that you point me to troposphere issues, I see this has been going on for a while.

A short while ago, in these comments I cast suspicious aspersions about the relatively recent, PRIOR data shuffle at UAH. You suggested it was normal practice. Am I correct to note that it seems with the latest data dance that you, too, are beginning to wonder?

Is it Mears that is the Spencer-equivalent for RSS?

John: Yeah, I guess I am starting to question the satellite results for the troposphere. It seems odd there is so much ocean warming, SST warming, surface warming, yet none in the lower troposphere.

And the algorithms RSS & UAH use are very complicated -- much more complicated, it seems to me, than the data homogenization and interpolations used to calculate the surface temperature. But they're so complicated it seems you really need to be an expert to understand them.

This is reminiscent of the mid-to-late 1990s, when people like Ben Santer were claiming the satellites (especially UAH) weren't showing enough warming. (In fact, UAH was showing cooling.) It seemed to be a real slugfest (so to speak), then a sign error was eventually found in UAH's model, and their results showed warming.