I think it's pretty safe to conclude that Arctic sea ice extent won't be setting a record low next month.

And here's how it looks according to NSIDC data: 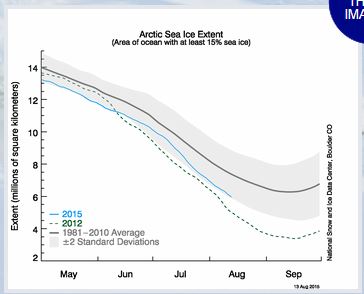 At the moment these results differ by a surprising 300,000 square-kilometers....

The yearly maximum of Arctic sea ice extent, occurring this year in late Febuary, was a record low according to both datasets.

Anyway, this failure to reach a new low does not mean the ice is "recovering," as I'm sure we'll hear over the next few weeks from the usual suspects. Right now the Arctic SIE is 5-7% lower than last year's value at this time. July's PIOMAS sea ice volume was 2.7% lower than in July 2014. Some recovery.

So when might Arctic sea ice extent reach a new record low? I don't know, but at last December's AGU meeting, an NSIDC scientist told me s/he wouldn't be surprised if we were still talking about the 2012 low ten years from now. (I'm not 100% sure if the conversation was on- or off-the-record, so I'm not going to give the scientist's name here.)

Anyway, I played around with the NSIDC data. (WARNING: Numerology ahead.) I plotted the NSIDC extent data since 1996, a year chosen for no particular reason that I can remember (I did this graph awhile ago), but took out the recent years with deep minimums -- 1999, 2007, and 2012. (Notice the deep minimums keep getting deeper.) I then took the trend of the years that were left, and came up with this graph:

The trend of the unexceptional years, shown here in green, intersects the 2012 record low in about 8-9 years. That's not much different from the 10 years I heard speculated about at AGU, but that's probably just a coincidence.

2012 had a mid-summer cyclone that tore up the summer ice. That doesn't happen every year, but it will again at some point, and the ice will be even smaller and thinner than it was in 2012. And that'll be a new record low year. It will happen, but it might be awhile.

The actually "mean time between minima" is 6.2 years, just using a back of an envelope calculation. The next one is due in about 2018 or 2019 (using exponential statistics) with 63% probability. So it would not be surprising if the next one was a few years late.

However, that does not make any assumptions about El Ninos or cyclones. A double or triple whammy of a warm winter, a cyclone and a warm summer would devastate Arctic Ice. This year will not be a record, but it may be in the Lowest 5, even 2nd or 3rd Lowest. That will melt much of the multiyear ice, and make the pack even more vulnerable next year, which may be quite warm.

Arctic ice is quite unpredictable. You think you understand it, then a 2012 (record minimum), or a 2013 (a "rebound" to the mean) happens.