The Backwards Evidence That Climate Deniers Use as Proof They're Winning 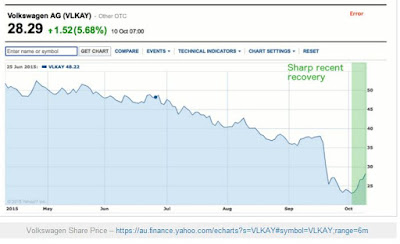 It's the latest amazing(!) rebound (don't strain your eyes trying to find it here) in Volkswagon's stock price, via Eric Worrall at Woo-What.

Because, you know, any letup of the so-called "free market" in punishing VW for their massive fraud -- fraud that killed ~ 40 Americans (hope none of them are Eric Worrall's relations!), and destroyed tens of billions of dollars of VW stockholder value -- is now apparently a VICTORY for climate deniers, who don't seem to mind breathing in particulate pollution as long as they can use it for political purposes.

In essence, Eric Worrall is rooting for more fraud like VW's, whose excess particulates cool the planet while chocking cities and killing people. Massive corporate fraud on VW's scale is now a denier's best friend.

From a standpoint of CO2 emissions, diesels are great. They get outstanding milage. The problem, which VW hid, was other pollutants.