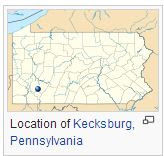 This Wednesday, December 9th, is the 50th anniversary of one of the most famous UFO incidents in history, call the Kecksburg UFO incident, and actually I remember this when it happened.

I grew up about 7 miles from Kecksburg, in a place called Acme. (Funny name, but Acme means "the best or highest point;" we were on top of a mountain ridge.) Kecksburg is a small village -- not even a town; I remember it for its Coke bottling plant, where a local high school star/ex-major league ball player from the area worked, and the Kecksburg Fire Department's summer fair. It's in southwestern Pennsylvania, and Acme, where my family and my grandparents and cousins lived, isn't even a village, just houses stretched out along rural roads.

But it was a great place to grow up, with a lot of freedom that seems sadly unavailable to many of the kids of today.

Anyway, there was a fireball in the sky, and something struck in a hillside behind Kecksburg. I was five when this happened, almost three months from turning six, and I have a very distinct memory of going out onto our front porch with my mom, and someone, my dad I think, and maybe others he was with, excitedly indicating or pointing to something that had happened over the local hill in front of us, in the direction of Kecksburg.

I remember it was cold on the porch, like I should have had a jacket on but didn't because we rushed out there, and I distinctly remember it was the dusk of an early winter day, for that time of year in Pennsylvania, still without any snow on the ground. That links up with the date of the Kecksburg Incident, December 9th, and the time of day it happened -- I remember it felt like the time of day when you should be coming inside to wind down and get ready for dinner, with rosy cheeks from the cold.

From a 1998 retrospective article in the Pittsburgh Post-Gazette:


A 1991 article in The Pittsburgh Press described generally what happened, based on various witnesses accounts that are included in greater detail in Gordon's video.

Dec. 9, 1965, was a dreary day in Westmoreland County - that is, until what was described as a roundish fireball appeared. It reportedly seared the gray sky at low altitude with a jet trail, then made S-turns and what appeared to be a controlled landing through the treetops into Kecksburg's woods. 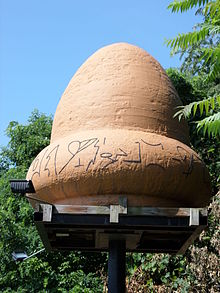 I didn't see any fireballs, but others in our driveway must have. My dad was a member of the Kecksburg Fire Department, but when he went to fires it was out of their rural station in Acme. I don't remember if he went to Kecksburg that evening. It would have been like him to do that, but I don't remember him, or anyone, talking about this afterward. But somehow I did acquire a vague feeling that something strange had landed in that direction, that officials rushed in, chased everyone out and removed some object on a truck.

The picture to the right is a replica of what some local people say they saw before officials -- local law enforcement? Military? Men in black? -- arrived and took over. Including the strange writing along its base.

So I was surprised to learn just a few years ago that the Kecksburg Incident is very well known in UFO lure and considered one of the most significant events outside of the famous Roswell, New Mexico incident.

There is a long string of investigations into this incident by journalists and UFO enthusiasts and the like, complete with all the required lure about coverups, lost files, the apparent silencing of a radio reporter who was killed a few years later under mysterious circumstances, FOIA lawsuits and the like. There are many videos on YouTube about it, including some full length documentaries by the likes of UFO TV. I watched a documentary a few years ago from, I think, the SciFi channel, and it was interesting, and, to me, especially for the southwestern Pennsylvania accent (which includes the regional word "younz," meaning the same as "you'all." which I didn't break myself of until graduate school), and because they interviewed an older man who was the spitting image and sound of my grandfather (but wasn't; just a man of exactly the same era and upbringing).

I'm not really the kind of person to dig into things like this too deeply. My loss, perhaps, but I figure the likeliest explanation was that some early satellite came down and panicked the stiff-collared government types in the midst of the Cold War. (The glyphs on the picture above do look a bit like letters from the Cyrillic alphabet that might be on the side of a Soviet satellite.) But it's been interesting connecting these almost dreamlike memories I have with something interesting that actually happened then.

Frankly, I hope it was some strange craft from elsewhere in the universe, and it's hidden away deep in some government bunker beneath the steep hills of Pennsylvania or West Virginia, still defying all the tests of science, still too risky to expose but ever closer to a Torchwood-like investigator's impatient leak. Wouldn't that be great?
Posted by David Appell at 12/05/2015 04:38:00 PM