Warmest November Yet, 2nd-Warmest Month Ever

Both NASA GISS and NOAA have posted their November temperature anomalies in the last few days, and both are searing.

I should bring those to a common baseline. Maybe later.

Both are guaranteed to have 2015 as the warmest year in their records, unless a huge meteroid slams into Earth, like, tomorrow. (I  hope it's not before my flight home.) The GISS anomaly for December needs only to be greater than -0.38°C for 2015 to be a record, and NOAA needs it greater than -0.76°C. As my niece says, easy peasy. 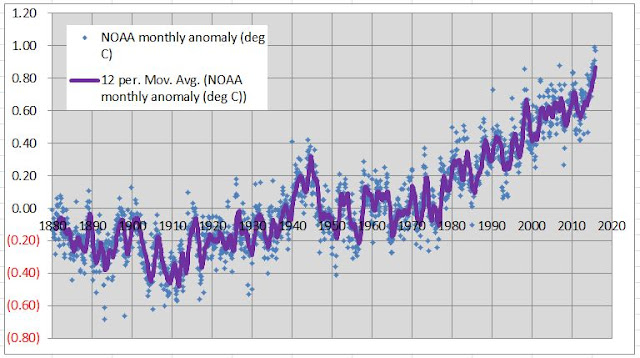 Assuming that December has the same anomaly as November, I estimate that NASA will put the probability of 2015 being the warmest year at 94%, NOAA at 97%.

I tried to do that calculation last January, but got different numbers:

PS: Joe, how did you do your estimates?

If you're looking at 2 normal distributions with say T1 > T2 both with a standard deviation a, the probability of T1 being higher than T2 is given by

For multiple temperatures, I just brute force it setting up 1000 trials of random guassian distributions. For NASA, I just used the top 6 warmest years but even that was overkill. It lowered the probability from 95.5% to 94%.

I'm not as certain as to the 1 sigma uncertainty for NOAA, but just assumed it was the same as for NASA.