El Nino Seems to Have Peaked

This year's El Nino peaked in the last few weeks, slightly higher than the 1997-98 monster (which was once considered a monster). 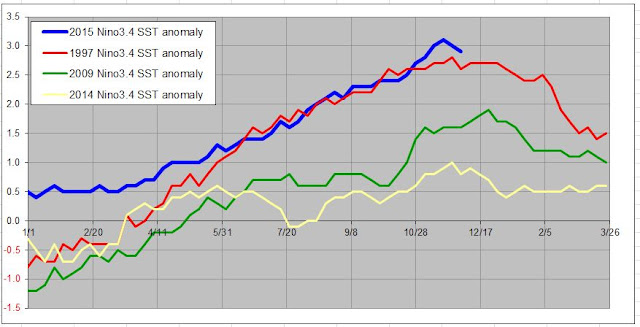 The latest NOAA weekly status shows similar peaks for the other Nino indices, and says " Niño
3.4 will remain strong into early 2016."

El Ninos usually bring rain to southern California and dry conditions to the Pacific Northwest, but this year it looks upside down: California is still weeks away from receiving rain, while Oregon and Washington have been getting pounded this week with several inches of rain -- over 6 inches where I live -- and strong, blustery winds. It's led to lots of flooding and landslides -- one landslide closed down the northbound lanes of I-5 in southern Washington -- and even a tornado that damaged a few dozen homes.

I don't mind the nasty weather -- it's really the only interesting weather we get around these parts -- but then I work from home and haven't been flooded out or in a tornado's path.
Posted by David Appell at 12/11/2015 10:29:00 AM