Cartoonist Off By a Factor of 1400 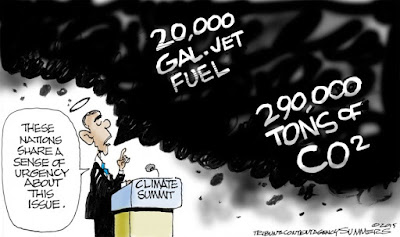 This cartoon is from Dana Summers of the Tribune Content Agency.

It seems he only cited Obama's jet fuel consumption, and no one else's. The juxtaposition of the two numbers seems to indicate they're related, but they're not.


"...22 seconds of global CO2 emissions. Add in two weeks of hotels, taxis, espressos, pastries, and wine toasts, and you can probably tack on another half second or so."

There is probably some double counting there, since the people are the conference aren't taking taxis at home, or eating pastries at home, or drinking wine at home. But the flying definitely counts extra.

Would it have been better off if everyone stayed home? No -- conferences are valuable, and Web coverage of them seems ever more available. The IPCC conference is more valuable than most, and worth some emissions. The solution to climate change isn't -- and will never be -- living in tents. It's generating the energy we need in ways that do not emit carbon.
Posted by David Appell at 12/05/2015 02:48:00 PM