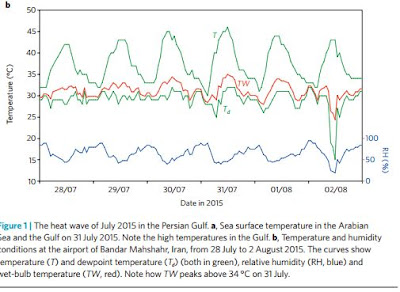 Here's an nice clean graph from a new news article in Nature Climate Change by Christopher Schär, showing the extent of last summer's heat wave in the Persian Gulf.

"It was one of the worst heat waves ever recorded," the article says. Temperature peaked at about 46°C (115°F), but it's the red line that is most important: the wet bulb temperature. Wikipedia says


The wet-bulb temperature is the lowest temperature that can be reached under current ambient conditions by the evaporation of water only.

It's relevant to human health, because when the wet bulb temperature gets near body temperature (37°C), our natural cooling system -- ventilation and sweating -- is disabled.

A wet bulb temperature above 35°C is dangerous. As the article notes, it's not just the elderly and ill who are at risk in such heat waves -- everyone is, "even young and fit individuals under shaded and well-ventilated outdoor conditions."

This article is about another Nature Climate Change article last August by Pal and Eltahir that projected wet bulb temperatures in the future. Schär writes:


Although TW = 35 °C is never reached under current climatic conditions in their simulations, it is projected to be reached several times in the business-as-usual 30-year scenario period in Bandar Mahshahr and Bandar Abbas (Iran), Dhahran (Saudia Arabia), Doha (Qatar), Dubai and Abu Dhabi (United Arab Emirates), and probably in additional locations along the Gulf that have not been specifically investigated.

And this sounds truly out-of-this-world:


Furthermore, temperatures are projected to reach unacceptable levels; for instance, in some years of the scenario period T = 60 °C will be exceeded in Kuwait City. The rise in temperature and humidity would thus be likely to constrain development along the shores of the Gulf.

In the mid-1990s I lived in Tempe, Arizona for a year and a half. There were many summer days when the high temperature was above 110°F, and the hottest day I remember was 122°F. (They closed the airport that day because they didn't have specs on how well their planes fly above 120°F.) Still, I was able to ride a bike around during the middle of the day for a mile or two without much trouble -- but with much sweating afterwards -- but the humidity was low and I was younger and did a lot of hiking back then.

Winter there was perfect, temperature-wise, but the summer heat gave me cabin fever, because life always seemed like a dash from one air-conditioned place to another. I found it especially strange to go outside at 10 pm where temperatures were still 100°F or so.

Very interesting, thanks. I think we don't pay enough attention to wet bulb temperatures. It is a clear physiological limit and it's hard to see how reaching values of 35C or higher wouldn't reasonably described as catastrophic.