This El Nino's Lower Troposphere Temperature, Compared to the Past

Here is a nice, relevant plot from Sou at Hotwhopper: it shows UAH's calculation of the lower troposphere temperature anomaly, for this El Nino, 2009-2010's, and 1997-98's.

This year is significantly ahead: 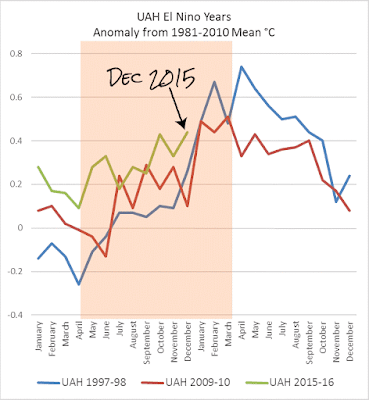 And here's an update to an (admittedly confusing) graph I've given before: a comparison of surface temperatures during this El Nino, compared to 1997-98.

Even though the strength (dashed lines, left-hand axis) of the respective El Ninos is comparable, with this year just a little ahead of 1997-98's, surface temperatures (solid lines, right-hand axis) are consistently higher by 0.2-0.4°C. There's your global warming.
Posted by David Appell at 1/07/2016 03:00:00 PM

Fascinating. It would be interesting to use 1997 and 2015 (and maybe other El Niño years) and input all forcings and feedbacks that we know of. It might be a good test of the accuracy of our knowledge and the skill of our computers, and maybe put better constraints on the pulse of warmth the El Niño gives.