Subsidies for Wind and Solar Power

Someone on a discussion forum I was reading wrote that solar power is subsidized by 96 cents per kilowatt-hour. (By comparion, the average US price for electricity is 12-13 cents/kWh.) That seemed unbelievable to me, so I thought I'd check it out. More or less, it's true.

Here are some numbers -- some recent subsidies for fuels that generate electricity, and electricity generation by source back to 1973. 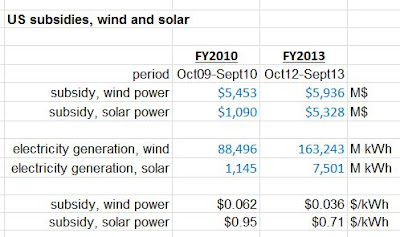 So the subsidies for solar are indeed very high, and for wind they're about 25%.

Is this a problem? I don't think so. The negative externalities of wind and solar corrected 3/16: fossil fuels -- what they cost that doesn't show up in consumer's monthly bills -- are huge, especially for coal. Mercury emissions that poison streams and can have neurological impacts on infants, SO2 emissions that create acid rain, contributions to ground-level ozone, particulate matter that gets in lungs, and so on. And that's not to mention the damage to miners themselves -- coal miners suffer more fatal injuries than any profession in America. Nor does it include the devastation of mountaintops in eastern coal mining states like West Virginia.

found the cost from damages due to fossil fuel use to be $120B for 2005 (in 2007 dollars), a number that does not include climate change and that the study’s authors considered a “substantial underestimate.” For electricity generation by coal the external cost was 3.2 cents/kWh, with damages due to climate change adding another 3 cents/kWh (for CO2e priced at $30/tonne). Transportation costs were a minimum of 1.2 cents/vehicle-mile, with at least another 0.5 cents/VM for climate change. Heat produced by natural gas caused damages calculated to be 11 cents/thousand cubic feet, with $2.10/Kcf in damages to the climate. They found essentially no damage costs from renewables. (Yes, some bird deaths – but fossil fuels kill far more birds than do wind turbines.)

This is money we’re all paying in medical costs (and compromised health), and US governments now pay about half of all medical costs.

Generating power with coal and oil creates more damage than value-added, according to a 2011 paper, with William Nordhaus (once the economist of choice for contrarians) one of the co-authors:

Summarizing that paper's findings: for every $1 in value that comes from coal-generated electricity, it creates $2.20 in damages. Total damages: $70 billion per year (in 2012 dollars).

Petroleum-generated electricity is even worse: $5.13 in damages for $1 in value.

In other words, according to this study, generating power with coal or oil actually sends the economy backwards.

The numbers say it would now pay off for wind, but not for solar:

So the US could save ~ several tens of billions of dollars a year by generating all our power with wind, even when subsidized.

But good luck explaining this to people who object to renewables on the grounds that "the poor can't afford it" (like Roy Spencer is fond of doing). Well, we could subsidize the bills of the poor, but that's no excuse for you or me or someone with a nice professor's salary like Roy Spencer not to pay for clean electricity. I buy 100% green offsets from my power company, Pacific General Electric, at a cost of $0.008/kWh. It costs me about $2.20/month, or an extra 5%.
Posted by David Appell at 1/28/2016 02:08:00 PM

In theory the US might actually save several tens of billions of dollars a year by generating all our power with wind. But, wind power is limited. There isn't nearly enough wind power available to generate all our power needs. Nor is there enough solar power, at the current state of technology.

How so? In the last 12 months wind has generated 4.5% of US electricity. Why can't we increase that by a factor of 20? It hardly seems that the US has reached the saturation point for wind turbines....

Well, there is sufficient wind and solar area ... Unfortunately, there is little willingness on the part of many people to be neighbors to such projects, given that to minimize line losses it makes sense to place generation near usage.

Accordingly, there is a large Price Of Anarchy to be overcome (freedom isn't free, in another sense), and perhaps compensating people who are willing to coexist with such projects or even put up their own capital might be one way of doing it.

It seems to me that if assessments of levelized cost of energy are to be believed, like that by Lazard's, to the degree the public is not supporting the rational market-incentivized approach to energy, heavy subsidies might be the only way.

Subsidies like these bother me in principle, but there are huge distortions of other risks, notably, the collective compensation of individuals for building and rebuilding in high risk zones along seashores, borne by both taxpayers and the insurance premiums of those who do not do so.

I'm hoping for the best, but am prepared for these subsidies to be withdrawn. And, when they are, my wife and I will deprive the grid of our electrons and go on our own, trying to minimize our connection to it. I know many other committed solar and wind energy supporters who feel similarly, including several rich landowners on the coast who built large wind turbines on their properties, thumbing their noses at the protects of local townspeople.