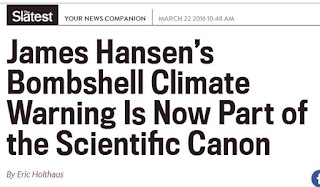 I'm sorry, but this is complete bullshit.

No single paper, by Hansen or anyone else, becomes part of the "canon" a day after it is published. (Nor does it based on the version published in July of last year.)

I haven't even read the new version of Hansen et al in detail yet. But it is certainly not part of the canon, for the same reason that a play of Shakespeare's wasn't part of the literary canon less than a year after it was first published -- only time can tell. It takes a good bit of time for scientific papers to be anointed, and this paper's conclusions are certainly far from the mainsteam.

There are some extreme and improbable scenarios in Hansen et al. Sure, maybe we could pass a tipping point by 2050 -- but I think it's more than likely we will not.

Hansen anymore seems interested in promoting alarmism at all costs. There's been a whiff of this throughout his entire career, but this latest paper is just too much to take seriously.

Relative to sea level today, that works out to a rise of...16 inches.

And the reactions Holthaus gets from other scientists, who weren't co-authors on the paper, aren't very convincing:


In an email to Slate, Ruth Mottram, a climate scientist who was skeptical of the initial draft, calls the final study “considerably improved.” Mottram, who specializes in studying the Greenland ice sheet, said “the scenario they sketch out is implausible, though perhaps not impossible … it’s frankly terrifying.”

"Perhaps not impossible" isn't exactly a ringing endorsement that says the paper deserves to be part of any "canon."


Richard Alley, a key figure in the polar research community, also gave the Hansen study cautious praise. “It usefully reminds us that large and rapid changes are possible,” Alley said in an email, and that “uncertainties are clearly loaded on the “bad” side.” Alley stressed, though, that the Hansen result was only a single study, and wasn’t detailed enough to be used as a firm prediction.

Kim Cobb, a climate scientist specializing in ancient climate change, agrees that the Hansen study is useful mostly because it explores the worst-case scenario. “My bet is on non-linearities kicking in that we cannot yet measure adequately,” Cobb said in an email. “In that way I think it’s important to explore the upper limits.”

Instead of the support Holthaus apparently thinks these give to the canonization for Hansen's paper, these are actually quite tepid remarks that duly show respect for the paper's authors without going anywhere close to endorsing their conclusions.

I don't see any reason to take this paper seriously. Sure, there could be tipping points in the future. That's easy to claim, and you can be wrong without consequence. But are they likely? I don't see any evidence presented there that they are likely by 2050, let alone 2100.

I'm afraid science writers are giving this paper coverage only because (1) they prefer alarmism, which is way to easy at the top of a big El Nino, and (2) they feel they need to give fealty to any work of Hansen's.

Maybe I'm wrong, and maybe I'll change my mind after I get into the details of the new version of the paper. But I don't expect so.

(I also feel that this paper was rushed out last summer before it was ready in order to influence the Paris talks. But then I also think the same about UAH's data version 6 "beta.")

PS: Robinson Meyer at The Atlantic more or less agrees with me: 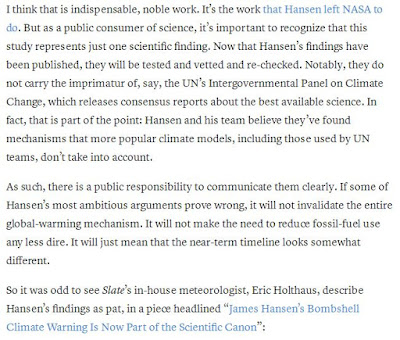 Except I wouldn't call this paper "nobel." It's just another paper, and one that goes out on a limb that the science can't necessarily support.
Posted by David Appell at 3/23/2016 09:33:00 PM

media headlines are exagerations. however, Hansen has a point. the paleo record has great changes with much less greenhouse changes of today. read the paper.

After getting outside comment from six scientists, including Alley, nearly all of which highlighted problems and unsupported conclusions (but did say it was intriguing and worth more study), The Associated Press decided the Hansen et al paper did not merit a news story. Seth Borenstein, AP Science Writer.

I haven't read the Hansen paper and coupled with the fact that this isn't my field, I'm reluctant to comment on its validity. However, I've become somewhat skeptical of Eric Holthaus since his recent publication of Just Reached a Terrifying Milestone which contained the following flat-out wrong statement:

Here's someone who doesn't understand the concept of anomalies and departures from the 1951-1980 average for THE MONTH.

Seth Borenstein, If you're still reading this, I saw that over the past 2 days there was a pretty extensive twitter exchange between Eric Holthaus, Tom Yulsman and Jon Foley about the point I made just above.

I noticed Holthaus' inaccurate statement back on March 12 when he first wrote it. It seems that Holthaus still won't correct it because he thinks people already know that July is hotter than February for the planet. Do they? It's actually not that obvious at all; it's his job to inform them.

As a contrast, I wanted to highlight two who got it right --- Jeff Masters and Bob Henson in their piece February Smashes Earth's All-Time Global Heat Record by a Jaw-dropping Margin:

"An ominous milestone in our march toward an ever-warmer planet
Because there is so much land in the Northern Hemisphere, and since land temperatures rise and fall more sharply with the seasons than ocean temperatures, global readings tend to average about 4°C cooler in January and February than they do in July or August. Thus, February is not atop the pack in terms of absolute warmest global temperature: that record was set in July 2015. The real significance of the February record is in its departure from the seasonal norms that people, plants, animals, and the Earth system are accustomed to dealing with at a given time of year."

It is possible to write about climate AND be accurate.

ncdave4life said...
This comment has been removed by the author.
9:49 AM

David Appell wrote, "The latest Aviso sea level data now shows, over the satellite era, an acceleration of 0.026 mm/yr² over a sea level rise of 3.36 mm/yr... a doubling time of 97 years... Relative to sea level today, that works out to a rise of 16 inches."

There are a few problems with that.

3rd, the supposed 3.36 mm/yr "current" rate of sea-level rise is more than twice the actual, averaged, measured current rate of SLR, at the best coastal tide gauges, and those tide gauge measurements are vastly more trustworthy than the satellite measurements.

Satellite measurements are distorted by factors which don't affect the coasts, like thermal expansion in the upper layer of the open ocean, plus satellite altimetry data has severe quality problems. To address some of the quality problems, in 2011 NASA proposed (and re-proposed in 2014 / 2015) a new mission called the Geodetic Reference Antenna in SPace (GRASP). The proposal was discussed on WUWT here, and its implications for measuring sea-level were discussed here.

4th, none of the best tide gauge measurement records show any sustained, statistically significant acceleration in SLR since the 1920s. Not even one.

Here're all 91 high-quality tide gauge records with data from 1930 to present, or nearly to present (longest records first). Click the location names to see NOAA's graphs and regression analyses:
http://sealevel.info/MSL_global_trendtable_1930-present.html

If you bother to do that for all 91 locations, you'll see that none of them have measured statistically significant sea-level rise acceleration since the 1920s. Not even one. Seven decades of heavy GHG emissions caused no increase at all in the rate of sea-level rise.

When atmospheric CO2 was under 0.031%, globally averaged sea-level rise at the coasts was just under +1.5 mm/year.

"Even though the human influence on climate was much smaller in the past, the models do not account for the fact that the rate of global sea-level rise 70 years ago was as large as what we observe today."