Note Added 8:50 pm: This February data is for RSS TLT version 3.3, not the new version v4.0 (see below). The middle troposphere (TMT) and lower stratosphere (TLS) have both been updated to the new version 4.0, but the lower troposphere data (TLT) won't be updated for about six months, I was told.

Reminder: UAH and RSS don't quite measure the same thing, since RSS misses area around the poles -- 0.9% in the northern hemisphere, and 6.0% in the southern hemisphere. But this may change with their new version 4 (see below).

Andrew Dessler has a thought about this.

Even WUWT can't deny it, though it tries, of course.


The new dataset shows substantially increased global-scale warming relative to the previous version of the dataset, particularly after 1998. The new dataset shows more warming than most other middle tropospheric data records constructed from the same set of satellites. We also show that the new dataset is consistent with long-term changes in total column water vapor over the tropical oceans, lending support to its long-term accuracy.

I'll try to get a copy of the paper and post some graphs from it. Tamino has the relevant graph. 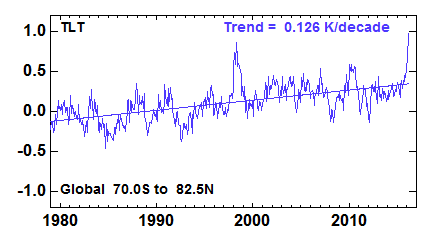