I am getting old enough that I (perhaps a little prematurely) pay attention to who dies and am surprised at some of them.

I have to admit I was very surprised to hear about both.

I mean, just a month ago I was listening to Joe Garagiola and Tony Kubek call Saturday afternoon baseball games on our black-and-white television in the living room of the house I grew up in, the house with a coal furnace and well water and a little bathroom my dad carved out underneath the stairs.

It was an older wooden house that my grandparents owned and my mom and dad were -- and I'm not even sure about this -- paying rent on. I incessently threw a rubber ball against the side of that house. I don't know how my mother put up with it for all those years, the thump thump thump until  evening, but she did and I only broke the kitchen window twice before they bought me a pitchback.

I knew of Kubek because he took a ground ball to the throat in the famous 7th game of the 1960 World Series, the Pirates versus the Yankees, the game that Bill Mazeroski won and that somehow my grandfather and father got tickets to. That was the kind of thing my grandfather did.

I kept score on a little pad I kept near the clothesline post in the middle of the yard, some other team always against the Pirates. Willie Stargell played for the Pirates then, still in the outfield, and Al Oliver, and Matty Alou and little Freddie Patek. And of course Roberto Clemente played out in right field -- Clemente, can you imagine him in your boyhood, throwing out runners at third base with arrows from right field, shockingly dying in a plane crash on a rescue mission to Nicaragua just a couple of months after he was granted his 3000th hit in his last regular season game. 3000 hits and then taken away. Observe that and try to tell me are no Gods who watch over our fates.

Clemente was buried at sea. 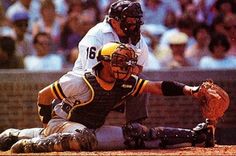 Even with Roberto Clemente in right field, my hero was Manny Sanguillen, the Pirates catcher. Sanguillen had this very cool way of catching while sitting on his haunches, like at the right, when there were no runners on base. Lord knows how he could sit like that. He was #35. I picked that when I started playing football. My dad bought me a catcher's mitt, but I never did play catcher, except in the yard bouncing a ball off the house. 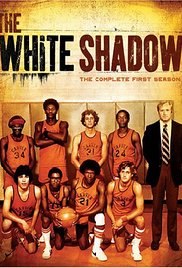 Ken Howard wasn't an athlete, but if you grew up then you watched The White Shadow. There weren't a million channels on TV like there are now, and it one of the only things on when you got home from school. I remember him as far, far too young to have died yesterday, at only 71. He was big and could have been a galoot, but was always a little too smart for that, and a bit too big to fit comfortably into whereever the high school tried to shove him. But his character cared for all his players, through thick and thin, including Salami (who is now a big-time movie director, but if you listen to him talk still has some Salami in him), and Coolidge and the trouble-maker Vitaglia, and they still seem like the kids you were in school with two periods ago.

It's not possible either Joe Garagiola or Ken Howard died yesterday, so I don't know why I'm writing this. There will be time to write about them later, and even if they're not directly on television these days, and even if I don't even own a television anymore, I'm sure they'll still be there when I find the dial again and turn it to their channels. I mean, I can hear their voices clear as day. So don't tell me they've gone anywhere. I'm not fooled that easily.
Posted by David Appell at 3/23/2016 11:45:00 PM