Imagine if this letter from Albert Einstein to Marie Curie had been stolen by thieves and dropped into today's public domain.

The disrespect! The manufactured controversy! Einstein calls the uninformed of the time "reptiles." Morano would bold print that and paste up Einstein's email address in red! Imagine the scandal this letter would create today, if it came in a Climategate-like email. First Einstein calls the deniers "rabble." Then he calls their views "hogwash." And just look at the grand collusion between these two elitists, one washing the back of the other, profuse praise, ignoring the collective wisdom of the hoi polloi in favor of their made-up physics. What hautiness! What arrogance! Watch Joe Barton and Lamar Smith summon up a Congressional hearing! Won't someone audit their scientific claims -- it's the least they can do! (The very least.) 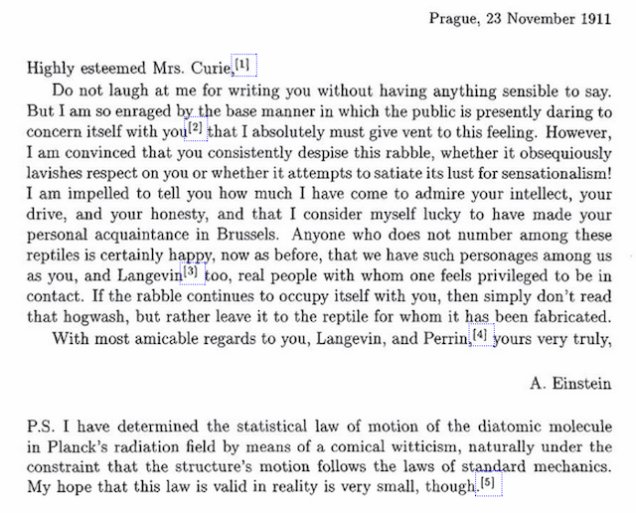 
The letter was related to the matter of the public scandal of Curie's affair with a married scientist, Pierre Langevin. Curie was a 43-year old wind, and Langevin 5 years her junior.

Langevin's wife published Curie's love letters to her husband, and the French public (usually tolerant in matters sexual) was whipped into a frenzy of condemnation by the equivalent of the tabloid press. That is about the closest resemblance to Climategate. The Moranos of that era had a field day.

It is wonderful to read Einstein's letter (he was somewhat of a philanderer himself) and then see the postscript - "oh, by the way, I did a bit of science too ... "