What is the Trend in the Airborne Fraction of CO2?

In the wake of the recent CO2 fertilization/greening world paper (I think this is good coverage of what it means, which is not "hallelujah"), And Then There's Physics wrote a post about the airborne fraction (AF) of CO2 -- what fraction of the CO2 we emit stays in the atmosphere? Because as we continue to emit CO2, its AF is by no means guaranteed to stay what it is now, and no one seems to really know how it will change. The concern, of course, is that it increases as nature becomes closer to saturation (the Amazon is already taking up less CO2) and as the ocean continues to warm.

ATTP gave a result by Pierre Friedlingstein that gives a result based on RCP, since 1990: 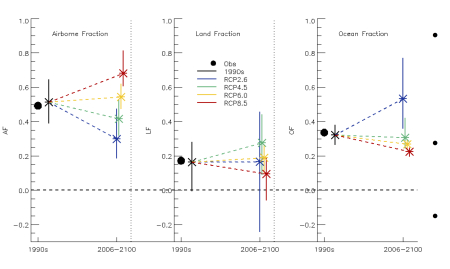 You can read his discussion.

There are surely studies around that discuss this. But I thought I might have enough spreadsheets laying around to perhaps estimate down-and-dirty the actual trend in airborne fraction.

Here are my data:

Here are the trends I find (click to enlarge):

There's considerable annual variation (blue points), but basically the 10-year moving average for AF is flat. So is the total AF since 1850. The last 10 years look like the annual AF has less variation, but that's also where my input data is the less certain (see note below).