Is Abdussamatov's Prediction of a TSI Collapse Coming True?

Remember that dip in total solar irradiance (TSI) that had some people excited last week?

It's gone. It was just a sunpot: 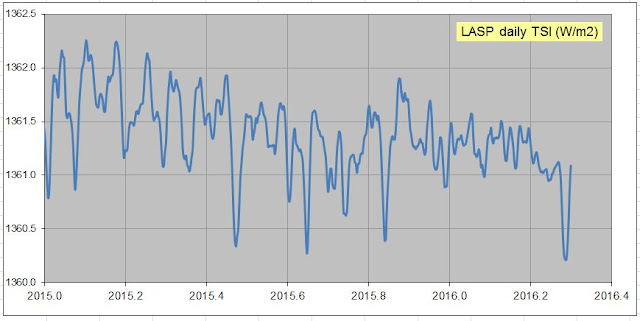 However, TSI is doing something interesting: it's dropping relatively fast now, down about 1 W/m2 since its peak in early 2015.

LASP's daily record only starts in early 2003. PMOD starts in 1978, and, except for the lower solar maximum for this latest cycle, it doesn't appear anything particularly unusual is going on:

It will be interesting to see the current cycle's minimum, but that won't be for another 5-6 years. Will it match this Internet-famous prediction from Abdussamatov in his paper that finally seems to have gotten published in a journal titled Thermal Science: 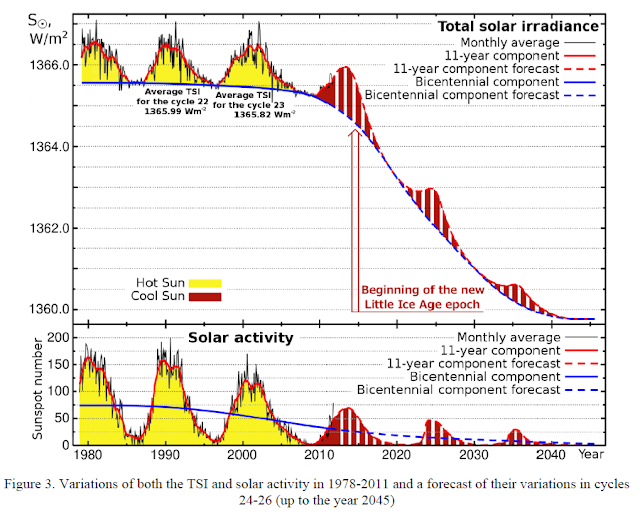 Is his prediction coming true?

Here's a plot showing about where he says TSI should be in 2016: 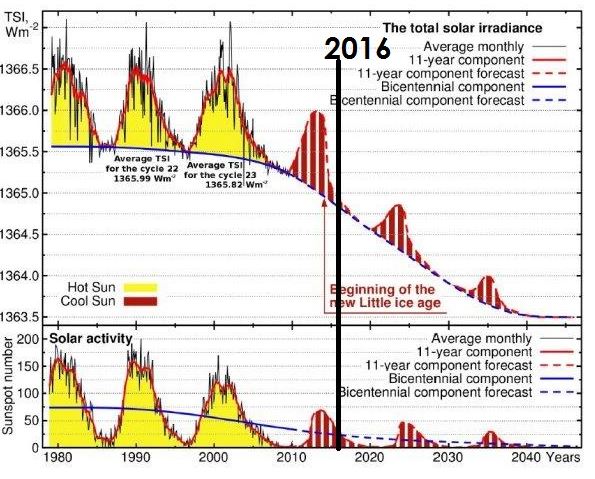 Abdussamatov says TSI should now be about 0.7 W/m2 below the baseline of the cycles from 1980-2010. The PMOD data certainly doesn't show that -- it's still above that baseline, by about 0.3 W/m2. Abdussamatov is too low by a whole W/m2, which is a significant amount when you're talking about the sun.

So I would say that, so far, Abdussamatov's prediction is failing, and there's no indication of the TSI collapse he predicted. We have not entered his Little Ice Age.
Posted by David Appell at 4/25/2016 09:23:00 PM

Very interesting post, David. A human tendency to see patterns in data that aren't really there has long been noted. I first saw it presented it in a picture of a random walk in William Feller's classic book, "An Introduction to Probability Theory and Its Applications, Vol. 1". There's even a word for it now, "apophenia". It appears that Abdussamatov has been guilty of apophenia.

THanks David. I suppose we should wait until the next solar minimum to rule A. out completely, but it doens't look promising.

I quickly skimmed through the Abdussamatov paper. That was painful. You've got a strong stomach David. Even a back of the envelope estimate says that in the worst case, a new Maunder minimum would put the temperature back to that in the 1990s. I hope we don't have to listen to the Macarena again.

Joe, for some reason this graph has stuck in my head since it first came out about three years ago (I think it was). Kudos to Abdussamatov for at least having the cojones to make a specific, numerical prediction.

increasing by 1-2% per year (depends on the year). There are other forcings too, positive (brown carbon) and negative (aerosols). Anyway, total GHG forcing gained 1 W/m2 from 1985 to 2014 (NOAA's data doesn't go back much future), and Abdussamatov says 2 W/m2 is enough to cause a new LIA.

Anyway, I believe the thinking these days is that last millenium's LIA was caused, not by the Maunder Minimum, but by a string of volcanoes from 1275-1300 whose cooling lead to a more cooling by a slight ice-albedo (negative) feedback:

I wasn't making the claim that the little ice age was due to the sun. I agree it was due to volcanic aerosols. That's what the literature says.

I think when I last did this exercise I was looking for the biggest effect possible so I assumed a peak solar intensity of 1362.1 w/m2 from back in 1958. That gives the temperature change for 2 decades.

Sorry for the confusion.

No problem, Joe. Thanks for the explanation.

Man track but the climate yards - as I see it.

Now that it's 2018 and we are actually in the minima between cycles, unlike when this was posted in 2016, things are different. The original post had one major flaw. It was posted DURING the decrease and did not mention there was a double peak in SC24 that extended the time frame until the minima would be reached.

This is in regards to the paper you pulled the graphs from- "Grand Minimum of the Total Solar Irradiance Leads to the Little Ice Age"
On page 6 of 10 they were predicting the TSI, based on previous historical trends, to drop to a level of 1363.4 ± 0.8 W m–2 for the SC24/25 minima. The level on 20180921, the latest data point available when I posted this is 1360.6644 with a measurement uncertainty of +/- 0.6. This puts us well below the expected TSI in the paper for SC 24/25 minima, is actually in line with what they were predicting for the SC 25/26 minimum at 1361.0 ± 1.6, and even possibly into what they were expecting for SC 26/27 at 1359.7 ± 2.4. There is some overlap due to the possible error in their predictions increasing the further out in the future you go. However, the point is that we are well below what they considered their most accurate TSI value for where we currently sit.

As for volcanoes, historically, there are more eruptions during an extended minima. So the 2 effects actually go hand in hand. Volcanic activity is slowly on the upswing, with new papers out about how increased cosmic ray activity affects volcanic activity