The Shock of Seeing Anomalies Above 2°C

This month's data -- temperatures, global, land and sea; lower troposphere up to lower stratosphere, sea ice extent and volume, Mauna Loa CO2 and all the ocean indices -- are now out, except for HadCRUT4 and, then, Cowtan & Way. They're always about two weeks later than GISS and NOAA.

To me, the most astonishing numbers are from NOAA's measurement of the average global land temperature, averaged across the globe's surface. The last two months have been well above 2°C: 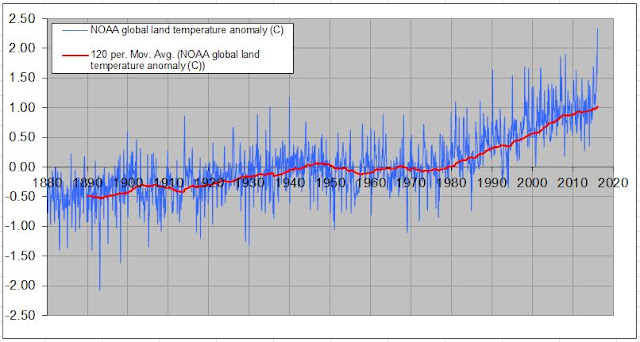 I've been paying close attention to all these monthly data for many years now, and seeing anomalies -- any anomaly -- approaching +2.5°C is really shocking, in quite an other worldly kind of way. (The anomaly is with respect to the 1901-2000 average*.)

That's a lot of warming in 18 years, from one big El Nino to the next one.

I don't know if the 2°C diplomatic target means 2°C for the change in the global surface average, or for a change anywhere -- and since the number is, as far as I know, just a guess at a target that is both doable and not too dangerous, I doubt anyone even thought to think that question much....

Americans: an anomaly of 2.33°C = 4.2°F. That is perceptable without instruments.

The warming has been coming at a steady 0.15-0.2°C/decade since 1990. So when I see stories saying that 93% of the Great Barrier Reef has died because of exceptionally warm ocean water, I start to feel angry about that. Deeply angry -- at everyone who is denying serious anthropogenic climate change and who is working hard to prevent us from saving the world that we know and love. And angry at those I personally know who are denying it.

--
* And can I say, is it really too much to ask that all the different research groups use the same baseline? Yes, I know that converting between them is doable and mathematically trivial. But's it's also tedious. And, yes, I know that trends are independent of baselines. But still....
Posted by David Appell at 4/21/2016 10:17:00 PM

The 2 degree target is for the average, as it implies greater changes for the poles and over land. At least, that's what I'd always heard.