A Sticking Point About the Movie "Alliance" 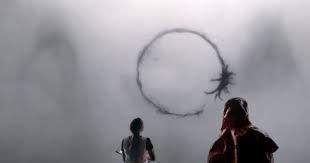 I saw the movie Alliance a couple of weeks ago. It's pretty good, especially if you like good, mostly hard science fiction. But somethings still bothers me about it.

This isn't giving anything away that's not in the trailers, until I warn you. In the picture to the right is symbol containing a sentence (or some complicated thought) of the alien's language. The plot evolves around a linguist's (Amy Adams) ability to translate such symbols and so try to communicate with the aliens. Before this she approached them with a whiteboard on which she'd write her name or a word from English, but that didn't work.

Instead she works on translating their language. The way they show her doing this is good stuff -- she tries to break down parts of the loop (and they're always loops) into individual "words" or "thoughts" or "feelings" or the equivalent. Eventually she succeeds somewhat, but it's too late and the politicans of the world take to aggressively dealing with what they see as a massive threat to the and to Earth. (There are about 12 of these ships at various points around the globe.) Of course that ruins everything.

Now you should stop here if you don't want to risk any spoilers.

Slate had a interesting interview with a real linquist who gave some insight into how different language structure words or thoughts. And a summary of what the plot means.

Apparently the aliens experience "nonlinear time." (I didn't get this this until I read about the movie afterward.) Their loops contains subsymbols that aren't necessary in a linear time order -- the aliens think about time cyclically instead of in a straight line. Slate: "As Louise [the lingust] learns the language, she also begins gradually experiencing visions of her future, a sign that she too is beginning to experience time differently."

I don't know what nonlinear time is. I don't see how it wouldn't violate causality. I don't see how the speed of light could be a constant in all reference frames, as we know it is. (Einstein assumed that as a postulate of special relativity, and by the accuracy of its predictions we take it now as a fundamental property of the universe.) If time is cyclic, couldn't you, in particular, travel from where you are today and when and come back to the same place and time? Or at least the same time? What then if you didn't do the same thing you did the first time? How can these aliens be just a few feet from humans and experience time so radically different?

That's just one thing that bothered me. The other is that, here are these aliens who managed to come here, en masse, from who knows where in the universe. They also know something about antigravity, or altering the direction of gravity, as the early parts of the show make clear; also their spaceships hang silently several meters above the ground.

I didn't find that convincing. Of course, the plot hangs on the struggle to understand their language before Earth's countries try to bomb them to hell out of them (trivial for them to handle). Without that struggle, the plot would collapse into much less than it is, and probably not enough.

So in these senses the movie isn't exactly hard scifi -- it alters reality for the sake of its plot. Just when they started getting to the good stuff, they pull a deus ex machina. The fact that a lot of people needed the plot explained to them afterward shows this didn't really work.

The movie is called "Arrival" in other countries like Australia?

It's called Arrival in the UK too.

The non-linear time stuff bothered me too, though mainly from a storytelling perspective rather than philosophical or scientific - it added another dimension (literally) which seemed to distract rather than enlighten. On the other hand it really heightens the sense of language and communication influencing perceptions of the world, which was the whole point.

I'm not sure if it was intentional but the scene near the end with the Chinese General at a party really reminded me of Lost Highway. Another film with a non-linear, in particular circular, sense of time.

Yeah I was disappointed. As soon as you introduce telepathy or "visions of the future" into hard-core science fiction, you might as well go off and watch Dr Who or Deep Space Nine. It was a pity because the movie started off OK. And just because a great big spaceship was involved does not mean it actually WAS a ship, there was some evidence to show it was more like a portal. And the dialog was hard to hear, seems to be an IMAX thing.
- the way non-linear time was portrayed was "wrong" in the sense that they were receiving information from the future which is a no-no and a lazy plot device.
- the squids wanted humanity to learn their language as it was the gift they were giving them in exchange for humanity helping them in the future. Did they call it a "positive sum game"? Learning THEIR language enabled the protagonist to see into the future. Each of the 12 ships concentrated on a different aspect of the language (it was taught as game-theory to the Chinese for example).
- the language symbols were circular as they were based on ink-rings, presumable because the aliens were squids. I did think this bit was clever. Think about it, an ink-ring cannot be draw linearly, it has to be created complete. So this is why the squid thought non-linearly due to the "Sapir–Whorf hypothesis".

My reaction was similar to those expressed here. The one interesting gimmick was to realize that Amy Adams' memories and dreams of her child were from the future, rather than from the past. But, this was more a director's trick. The future time with the living child was presented before the main plot, in order fool the viewer.

I was disappointed in the weakness plot excuse to have an imminent attack on the ships. I could imagine an immediate attack, although that would be foolish against a far superior technology. But, when the translation was coming along with no belligerant actions, the attack was merely a plot device to create tension. It worked, but it was cheap.

I see your point about how odd it seems that the aliens could not translate an Earth language -but I interpreted the one-way nature of the language problem in the film differently.

It is revealed that the aliens non-linear language, and the new cognitive capabilities it enables, is itself the tool/weapon they wish to give humankind. I think for this reason they needed to set up events so that Adams' character has to do all the hard work, progressively immersing herself in the heptapods' experience of reality; I'm OK with the notion that it just could not have worked if the aliens chose the short-cut of communicating in an Earth language. I also tend to prefer that explanation to the idea that, in keeping with the Sapir-Whorf hypothesis at the heart of the story, the aliens simply couldn't think or communicate in a linear times-arrow frame.

As for the political themes, I teach international relations and political philosophy, so my particular problem with sci fi is that I keep seeing political theory in every story. I thought the way the story worked through the tension between political realism and liberalism as responses to the presence of extraterrestrials was interesting -one world cooperation without one world government. And I also thought it was interesting that the actions of a Chinese character were central to resolving the story.

Mark wrote:
"the Sapir-Whorf hypothesis at the heart of the story,"

Yes, that was definitely a crucial idea in the story, and one I've been enjoying reading about afterwards.

"As for the political themes, I teach international relations and political philosophy, so my particular problem with sci fi is that I keep seeing political theory in every story."

Curious: Have you come across any scifi stories or movies which you think handled this is a convincing or acceptible fashion? Star Trek, maybe?