John Fleck's "Water is for Fighting Over" 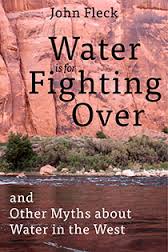 The first thing to realize is that the title is intentionally misleading, even a little risky. It's full title is, "Water is for Fighting Over: And Other Myths About Water in the West."

The subtitle makes all the difference.

Because Fleck took a different, refreshing turn on the subject.

Disclosure: I know John and have had dinner with him a time (or two?) when I was back in Albuquerque on family business. (My mother, now deceased, lived there, and my dad still does. I went to the University of New Mexico after we moved there in the late 1970s,after the steel industry fell apart in southwestern Pennsylvania. I was an undergraduate there for three years, and graduated with a BA in math and physics.) John is a really great guy, and maybe that influences my review here a little bit. Frankly, it should.

It's easy to look at the Colorado River, which not long ago didn't release a cubic centimeter of water into the Gulf of California. Seven US southwestern states all wanted a share of the river's water. State-by-state quotas were established in the 1920s, the worse time of all because the river was then at long-term highs, not at all typical of the present decades, or of today's droughts.

There were arguments and lawsuits. Every state struggled to get as much water as it could with the 1922 Law of the River, an edict that sounds like something happy out of Middle Earth. Issues went to the Supreme Court, some cases lasting more than a decade.

The glory of Fleck's book is that he saw through all these struggles between one state's agency's position, Mexico's interests (often ignored), California's seemingly inexhaustible thirst (kind of a bully), thirsty Arizona and Las Vegas, and the ever-forgotten Native Americans.

He recognized that these had, in recent years, been superceded by a network, a network of people from state agencies, tribes, environmental groups and more, who came to realize that working together, quietly in the background, hashing out their differences at conferences of specialists and friends, at happy hours afterward, at small gatherings at hotels in the region -- that this approach worked better, more smoothly, more fruitfully in overcoming differences and finding a way to real agreements. Person-to-person. And to this day.

That's not easy for a writer to recognize. It would have been much easier to write a book about all the looming shortages of Colorado River water, how (it's claimed) it simply cannot meet all the water needs of the big southwestern cities, and southern California as well. But Fleck drove all over the southwest, watching dams open and talking quietly to the state and national officials who made those happen. The water kept flowing.

That's Fleck's second significant realization -- that, when water is scarce, regions and cities and states learn how to make due with less. It isn't a mano-to-mano struggle over every last drop of water -- water managers have learned that there is no hope for one if there isn't hope for all. Albuquerque, Las Vegas, LA -- all have made major strides in water conservation. And John had the foresight to recognize that, and write about it.

So this book isn't an update to Marc Reisner's 1986 Cadillac Desert. Fleck's book looks deeper, for the real story, the human story of how people are making it work, and it finds optimism. And that isn't a message a writer finds every day, or, either, that the reader hears every day.