First They Came For the Muslims.... 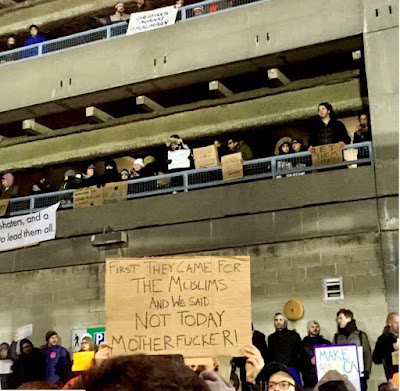 Do you agree with this statement?

"In order to protect Americans, the United States must ensure that those admitted to this country do not bear hostile attitudes toward it and its founding principles. The United States cannot, and should not, admit those who do not support the Constitution, or those who would place violent ideologies over American law. In addition, the United States should not admit those who engage in acts of bigotry or hatred (including “honor” killings, other forms of violence against women, or the persecution of those who practice religions different from their own) or those who would oppress Americans of any race, gender, or sexual orientation."

Charles, I don't have any need to comment on that statement.

PS: I'm far more worried about being shot when I go to a movie theatre or a mall, than I am of any refugees.

What parts of the statement do you agree with (if any)?

What parts do you disagree with (if any)?

I think for Donald "grab them by the pussy" Trump to try to condemn "violence against women" is the height of hypocrisy.

In any case, I'm not interested in your litmus test.


Do you have any problem with:

Slavery in the US?

Segregation in the US?

Do you support freedom of religion and free speech in the US?

"I'm far more worried about being shot when I go to a movie theatre or a mall, than I am of any refugees."

Jews, women and gays in France, Germany, etc wish this were true for them.

My sister, mother of two, had to run out of an Oregon mall because of a shooter. An American shooter.

So don't try to tell me about the threats faced by women.

Donald and his supporters are heartless and cowardly.