The graphs I posted earlier today are from the joint GISS/NOAA press conference this morning, announcing that 2016 is officially the warmest year in both their records.

All their slides and graphs can be found here.

It's only the warmest year in the Hadley Centre's records, which go back further. Warmest than 2015 by 0.01°C. Their error bars are ± 0.1°C, so they say 2016 was "nominally" the warmest, though the difference wasn't statistically significant.

The difference between the three datasets is mostly in how they treat the Arctic, where there are few temperature stations but which is now warming very fast. The Met Office explains here.

A few notes I took while listening: 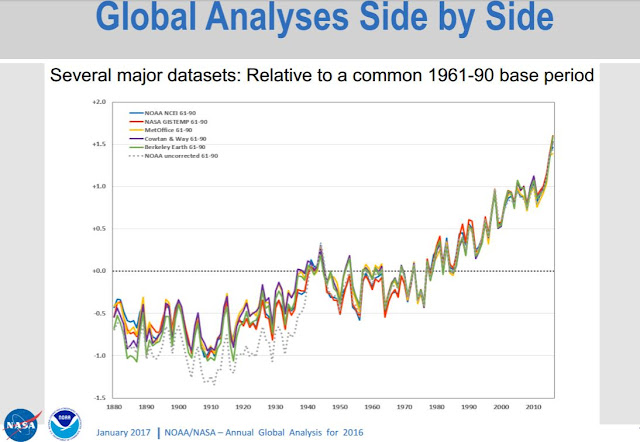 In practice, this point does not seem to have the impact on debates that most of us think it ought to have.

I have brought this up again and again in various discussions with self-proclaimed "skeptics" here and there. In every case, they simply shrug it off. From what I can tell, their feeling is that changes to the record that reduce the trend are "corrections" (good) while changes that increase the trend are "adjustments" (bad). Thus, they ignore the "corrections" as being uncontroversial and not requiring attention, and focus only on the "adjustments" (i.e., upward changes).

So in the case of global land/ocean averages, the trend-reducing "correction" of SSTs does not really count -- agencies like NOAA etc. don't get moral "credit" in their eyes for making these obvious and necessary corrections. But the (smaller) trend-increasing "adjustments" of land temperatures matter a lot, and are evidence of bad faith and dishonesty.

It's a bit like Maxwell's Demon, but for facts and ideas rather than energy. There is a mechanism in the mind that examines facts/arguments/ideas and assesses the degree to which they are compatible with the fake-skeptic's existing world-view. Items that are compatible are allowed to pass by the mind's gatekeeper, but items that would conflict are blocked.

Worse yet, the act of blocking a particular fact/idea/argument seems to "inoculate" the fake-skeptic against future exposure. Next time the same item comes up in discussion, they mentally block it even faster and more effectively, because the mind's gatekeeper says "Nope, I've heard and rejected that old argument before."

I'm not entirely sure how I feel about highlighting this point in that context. It's obviously preemptively addressing the all-too-common accusations of data tampering to increase warming, which is reasonable in principle (er.. the addressing, not the accusations). Certainly I think it's reasonable to bring it up in discussions when someone alleges that warming is caused by adjustments, or something like that.

However, I feel like bringing this up preemptively is playing their game. It kind of subconsciously implies that the direction of adjustments is important and that those which increase warming rate could be illegitimate. The reality is it shouldn't matter whether adjustments move the trend up or down or by how much, only that adjustments are justified. That adjustments reduce overall warming in the global land-ocean datasets is a random accident of history, and I'm wondering how this would be addressed in an alternative universe in which the adjustments go the other way. Perhaps we can count ourselves lucky that this is not the case.

We don't even need to think about an alternative universe though. There are certainly important climate datasets that are subject to large adjustments which enhance the trend towards a greater "warming" influence.

Of course, it's much easier and more effective, given the time available, to show a simple graph to (in theory) deflate any perception of wrong-doing rather than trying to explain the technical reasons for individual adjustments to a layman audience.

When I was working as an actuary, I sometimes had to get rate approval from a state insurance department. It was easy for me to portray some aspect of the calculation as "conservative." I understood the statistics better than anyone else, so I knew how to spin them.

David, it doesn't matter if you don't understand or accept the raw temperature adjustments. Scientists *DO* understand them, and they all agree such adjustments are necessary and appropriate.

Richard Mueller didn't believe them either. So he formed a project and group, BEST, with Koch brothers funding, to look at all the raw data and methodologies from scratch.

He came back with temperatures in total agreement to the published data of GISS, NOAA, Hadley Centre and more.

In 1941, the first caretaker dies, and a different caretaker replaces the old thermometer with a more “modern” one, and then reads it every day at 5 pm, from 1941-1995.

From 1996-present, yet another new caretaker installs a new digital thermometer, which sends, by satellite/internet every four hours, temperature readings, including at 2 pm and 6 pm.

Question: How would you construct a time series for the temperature of this location from 1900-present?

Paul: That's a very good point. You're right (about the change of the long-term trend). Emphasizing that it decreased the long-term warming trend sort of plays their game.

On the other hand, there are so many people who are utterly unaware of the need for adjustments or how they work that little beyond the decreased warming trend can get through to then.