Of the three, the eclipse is the least describable. Words don't exist. It was as if the entire world suddenly turned into a giant dream, where all rules were suddenly turned off and you instantly realized you were someplace you'd never been before. I can't exactly remember what I expected to see -- except, in my mental image, I stupidly pictured myself in this park looking to the west. (I know the sun rises in the east, but my pre-image had it backwards, because the eclipse started at the coast and went west-to-east, and perhaps also because the sky from the park I knew we would be in is much larger to the west.)

Still this was nothing like I could have expected. By that I mean, I don't think I'm capable -- or anyone is capable -- of imagining this in any way like it actually happened. It's a relatively simple astronomical event to grasp, but the actuality of it is not.

About 20 minutes before totality we started to notice the day was getting darker. Subtly at first. Not so much the sky as the grass and trees around the park -- they were tinged in a more muted shade of green. The last few minutes before totality were very exciting -- in fact the entire hour and 6 minutes was exciting -- but then suddenly darkness seemed to come out of nowhere.

It didn't get completely dark, but more like a night with a full moon. The rest of the sky turned to dusk on the horizon (see below for a few pictures). For the two minutes of totality here, I wasn't aware of anything else going on in the world, of anything else even existing in the world -- it was a deep immersive experience that took me over at my core. And then, at the end of the quick two minutes, the diamond ring appeared -- and the entire park of maybe 300 people erupted in even louder cheers and whooping. The ring only lasted 2-3 seconds, but it was the most amazing sight of all.

I now understand why you have to be in the path of totality to experience this fully. Even the last 30 seconds of pre-totalilty, when obscuration was 98-99%, was nothing like totality -- the sun is just too bright even at one or two percent. At totality everything suddenly changes. The world collapses. I can understand why the ancients might have thought the world was ending. The sun's corona was very clear, and seemed to extend several solar diameters -- three or four? -- but still it was too much for my unfiltered iPad camera (see below). 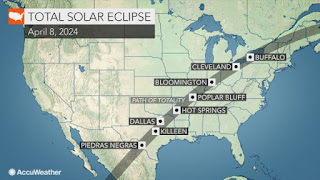 Ten minutes after totality we were already Googling to see where the 2024 U.S. eclipse will happen -- it's a swath from Texas up through the Ohio valley to Cleveland and Buffalo. Today's event was so absolutely amazing that I am
definitely going try and travel to the path of totality to see that eclipse.

Today here couldn't have been more perfect. It was a completely clear, blue sky -- not a cloud to be seen. It was at a nice time of the day, a refreshing morning still hanging in the air. It was in August, when the Williamette Valley usually sees very clear skies. And it was Monday, easy to take off, and you still have the week ahead of you. I got lucky.

Below are some pictures I took today. The pictures during totality aren't good -- I was using my unfiltered iPad. Also, as I only realized later, I had it set to Video and not Photo, so every click was a 1/2-second video. (Here I've included screen shots of those clips.) I now wish I had not attempted to take any pictures at all -- especially without a filter -- and instead just looked at the eclipse and felt it even more; as it was I forgot to look for stars coming out, or planets (my sister said she clearly saw Venus), or pay attention to the temperature and the winds. I was barely aware of myself. My sister wept during totality; I got goosebumps. It seemed like a dream, and it still feels like it was a dream. I can't convey what I felt. I can't even convey it to someone who also saw totality, it was that unique. 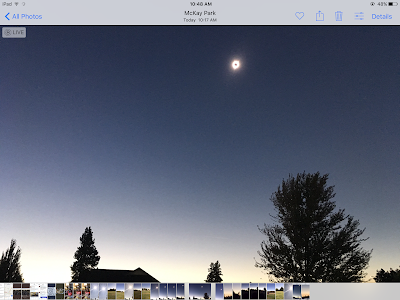 I always tell people they will witness something that they will never forget. It's like that scene from the movie "Contact" where Ellie says she has "no words".