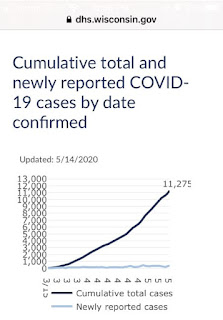 I don't remember now exactly where I found this graph, but it shows that COVID-19 cases in Wisconsin were increasing exponentially when, last Wednesday, their Republican dominated state supreme court decided, on a teleconference from the sequestered safety of their homes, that the state should be reopened immediately, without any plan to safely do so. Just let the herd out. Sure enough, (some) Wisconsinites immediately took to their bars and taverns. USA Today wrote:


The Tavern League of Wisconsin, a trade association of alcoholic beverage retailers in the state, posted on Facebook shortly after the ruling that, while guidelines should be followed, "you can OPEN IMMEDIATELY!"

"We’re the Wild West," Wisconsin Governor Tony Evers said. He had been trying to protect his people, something Republicans can no longer abide.

I haven't seen any data since. I find it difficult to find timely raw data for cases and deaths for states as a function of time. Anyone know a good source?

Tests in Wisconsin, like the rest of the country, have roughly doubled in the last couple of weeks. The larger number of tests must be factored in when analyzing Wisconsin't growth in number of cases.

Good point. So what would be a meaningful metric to track progress? Deaths? Cases/test?

Yes, both of those. Also, hospital admissions or number of ventilators in use.

OK, thanks David. I'll try to get to those later today.

It's not a good point at all. I live in Wisconsin and there has been more than adequate number of tests available for months. I've been tracking the rate of infection and deaths in my county and it's clear that both deaths and infections are on the rise. I expect it to get much worse very soon.

There was a comment on the other thread that governors are simply assuming emergency powers. This is nonsense. Wisconsin statutes clearly give the governor the power to declare a public health state of emergency. The issue decided by the Supreme Court was whether the governor could keep declaring a state of emergency unless approved by the Legislature (read, Republican-controlled). What's interesting is that even the conservative Scott Walker-appointed judge, Brian Hagedorn called the decision by his conservative colleagues "tyrannical".

The key vote on the decision was made by Judge Daniel Kelly who was overwhelmingly defeated in April by the liberal (read, sane) Jill Karofsky. If it weren't for Wisconsin law that pushes succession on the court back to August, the 4-3 decision would have gone the other way.