COP26 (Conference of the Parties) in Glasgow runs from October 31st to November 12th.
An article in Forbes by Marshall Shepard, a prominent climate scientist, lists four things the average person needs to know about it. I doubt anyone reading here is average, but this section was useful, on COP26's Key Goals: 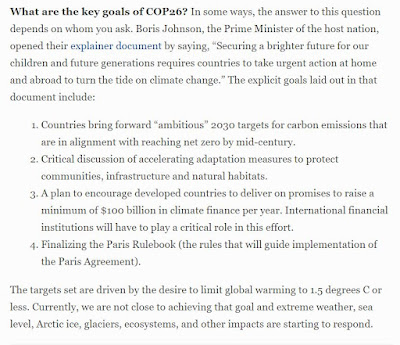 Click on the image to enlarge it if the resolution is Blogger-crappy.
I can see countries doing #1 and #2, because it's just words and they did the same for Kyoto and Copenhagen and Paris, missing those targets just as they'll no doubt miss any targets they make at Glasgow. Many have already announced net zero targets by 2050 or 2060. Easy to say, it's like a New Year's Resolution that you're going to lose 20 pounds this year. Not so easy to do, and by Jan 15th you're back to your old slovenly ways.
#3 looks unlikely -- $100 B/year? (And that's the minimum COP is asking.) Americans won't accept that. Democrats won't be able to pass it in the budget, with Manchin and Sinema refusing anything climate-related or that might tax the rich. I don't think the average American would be for this anyway -- they're stingy enough on foreign aid as it is. Get this, published in June:

Do Americans want the U.S. government to spend more or spend less on foreign aid? The correct—if perhaps surprising—answer is more, by a lot. Most Americans say aid should be 10 percent of the entire federal budget, almost 10 times more than the roughly 1 percent of the budget that currently goes to foreign aid. But here’s a paradox: When asked whether the U.S. should increase or decrease aid spending, most Americans also say that the government should spend less on aid, not more.
What explains this consistently inconsistent polling result? The problem, as NPR explains, is that Americans massively overestimate the amount the U.S. government actually spends on aid as a proportion of all spending. So instead of thinking accurately to themselves, “We should be spending 10 percent of the budget on aid, and we only spend 1 percent. This is terrible! Increase aid spending!” Americans think, “Gracious, we must spend at least 20-50 percent on aid. That’s too much. It should be 10 percent. Cut aid spending!”

I don't have any idea if European countries would spend $100 B/yr (currently €86 B/yr), but with economies at least a few times smaller than the US's it seems a big ask.
#4 is more words.
Limiting warming to 1.5°C? COP26 will surely end by stating that goal and some plan to reach it, but it looks impossible now. September: UN Chief says it's impossible without "immediate, large-scale emissions cuts." Well that's certainly NOT going to happen. OK, the laws of physics allow it, and it's technically and economically feasible. But

The IPCC looked extensively at emission reductions required to pursue the 1.5℃ limit. It found getting on a 1.5℃ track is feasible but would require halving global emissions by 2030 compared to 2010 and reaching net-zero emissions by mid-century.

I can't see the world halving emissions (a little more, actually) by 2030, nine years from now. If my math is right, cutting emissions by 50% in 9 years requires an average cut of 7.4% per year. I can't see the US, China, India doing that. Can you?
Anyway governments can say all they want. The fossil fuel barons have other plans, and by whatever corrupt means it takes they're going to sell their oil, gas and coal regardless of the price of wind and solar.
So I'm pessimistic. (Maybe I always am.) History of COPs doesn't give much reason to be optimistic. I mean, come on. From Climate Central: 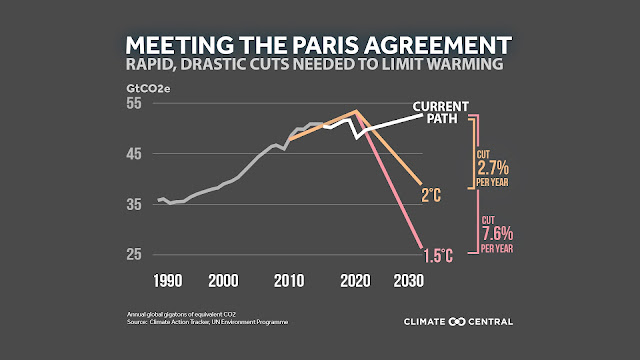 The final graph shows that CO2 growth has been flat for over a decade. This plateau followed a period of accelerated growth. This is great news. We're not going to achieve 1.5C, but that target was only introduced after it was already all but impossible to achieve.

Your source shows we're on track to reach around 3.2°C by the end of the century, but that is under a pathway that we've already working to deviate from. It means we should end up in much better shape.

Only a decade ago, Hadley Center had projected 5-7°C warming by 2100 under BAU. As we continue to take action, BAU will continue to trend towards lower warming.

But I wonder what it is in terms of CO2e.

I have a graph I'm going to blog shortly, but for the US, at least, CO2 has dropped as it has switched from coal to natural gas (due to fracking), but methane leaks (apparently) have meant CO2e is basically flat for over a decade, declining only slightly.

But not many countries frack like the US does, so we may be an anomaly.

Actually I know where this data is -- I'll find it and post it.