My Article on Technosignatures

I also have a feature article in this month's issue of Physics World magazine, on technosignatures:

At the moment it's only available to registered users of the site, but registration is free. In a week or so there'll be a publicly available link and I'll post that then.

"Technosignatures" are any sign of technology on another planet. Examining the "technosphere" is a burgeoning field that astronomers and astrophysicists are starting to think about, especially as the James Webb Space Telescope is about to launch (December, they say now) and as even better telescopes might come online next decade if recommended by the forthcoming NASA Decadal Survey.

For the last two decades astronomers and astrobiologists have been thinking about how they might detect life on exoplanets, via "biosignatures." These might be the detection of methane in a planet's light spectrum, large amounts of oxygen, and a host of other possibilities, due to microbes or plant life. If life is ever detected on another planet, it's likely it will be via some type of biosignature -- it could happen in the next couple of decades.

Just in the last couple of years scientists have also begun thinking about "technosignatures," signs of technology akin to how biosignatures are signs of life. If other planets have an advanced technological civilization, akin to ours or more advanced (since ours is rather nascent), there may be signs we can detect astronomically. These might be city lights on their nightside, industrial pollution in their atmosphere, solar panels on their surface or in orbit, or megastructures like a Dyson sphere* or swarm or ring, or who knows what. People are making calculations of what might be detectable by the Webb telescope or TESS, and by telescopes that are hopefully recommended like LUVOIR and HabEx. There will be an enormous amount of data to sift through, looking for anomalies. I tried to cover some of this rapidly expanding field in my artice.

* As you may know, a Dyson sphere is a hypothetical structure that would completely surround a star, thereby capturing all of its energy output. (Such an structure around our Sun, at Earth's distance, would capture 2 billion times as much solar energy as falls atop Earth's atmosphere.) Except a Dyson sphere isn't mechanically stable -- they would likely break up due to any drift, as Dyson wrote about in 1960 when he first proposed this idea. (A Star Trek: The Next Generation features a Dyson sphere. [Video] Magically it was stable.) If it could exist, a Dyson sphere would heat up and radiate outwards. A Dyson sphere at Earth's orbital distance would radiate at Earth's brightness temperature, 255 K, so with a blackbody spectrum with a peak wavelength of about 10 microns, in the infrared. People have actually done searches for Dyson spheres in the galaxy.

Instead, a civilization might construct a more stable Dyson configuration like a swarm or ring or bubble -- I've used the figure from my article below. Why? One idea is to capture solar energy on them and beam microwaves to the planet's surface. But who knows what an advanced civilization might do with them -- maybe live on them! These should have a radiative signature too, a technosignature. It's all hypothetical of course, but fun to think about.... It was a fun article to write. 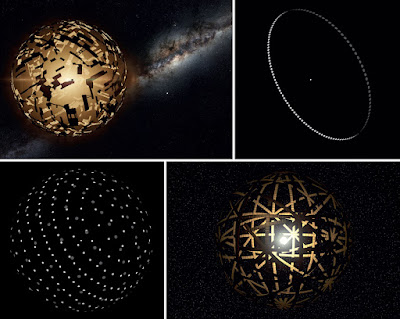 Thank you. I always enjoy megastructures. So simple in concept, so mind-boggling in scale.

My guess is that a sufficiently advanced civilization would find a way to mask any signatures.

They may have to.

One solution to Fermi's "Where is everbody?" question is the " dark forest" proposed in the "Three Body Problem" novels by Liu Cixin.

This describes the galaxy as a hostile environment in which civilizations which advertise their presence are destroyed by others intent on removing potential threats.

The best survival strategy is to hide, masking or minimising your emissions and activities so that you appear to be an uninhabited solar system.

By that criterion, we are already visible. Our first strong radio signal was Marconi's transatlantic transmission in 1900. Anyone within 120 light years, with a radio telescope and decent noise-filtering software, knows that we are here.

Entropic, other authors had described the same situation earlier and better than Cixin. "The Forge of God" or "The killing stars", for example. In Cixin's world with lots of civilizations it doesn't really work. Any civilisation that go around killing less developed ones also paint a big target on themselves. Other civilisations will know they are lethal and put a priority on hunting them down. Even if you want to get rid of competitors, it's better to stay quiet and hope someone else does the deed. A solitary civilisation is, on the other hand, free to wipe out all competition.

We are also visible in how the composition of our atmosphere has changed, which gives a clear spectroscopic signature. Any civilisation that noted long ago that Earth with it's oxygen atmosphere must harbor life will notice how the CO2 level started rising recently, and might find traces of CFC:s etc too.

Thomas, and not just CFCs, but an industrial pollutant like NO2. I write about this in my article:

"Another technosignature could be the pollution that
aliens in the early stages of technological development
are pumping into the atmosphere of the planets
they inhabit. Indeed, atmospheric chemical pollutants
could be identified in the same way as biosignatures
like oxygen and methane – by looking at the
spectral data.

"In 2014 astronomer Henry Lin and colleagues
from Harvard identified certain chemical pollutants
– such as chlorofluorocarbons – in the Earth’s atmosphere
that have significant absorption features in the
spectral range covered by the JWST. They found that
these chemicals could be detected by the telescope,
in the atmospheres of transiting Earth-like planets
around white dwarfs, over roughly a day and a half of
observing time, if these compounds are present at 10
times the current Earth level (ApJL 792 L7).

"Another suggested technosignature pollutant
is nitrogen dioxide, NO2, which is found here on
Earth as a byproduct of combustion from vehicles
and fossil-fuelled power plants. In a study published
this year (ApJ 908 164), Kopparapu and colleagues
examined whether NO2 could be detected in the
atmospheres of exoplanets within 10 parsecs. If the
planet was cloud-free, Earth-like NO2 levels – which
can reach 5 parts per billion in urban areas – could
be detected in the infrared with about 400 hours of
observing time using the proposed LUVOIR telescope.
Some 40 years ago, NO2 levels in the US were
about three times higher than today, so a nascent
alien industrial civilization might be detectable with
less viewing time.

"Characterizing the signatures of NO2 and chlorofluorocarbons
is half of the first NASA non-radio
technosignature grant ever awarded, in June 2020,
to Adam Frank of the University of Rochester in
New York. Called Characterizing Atmospheric
Technosignatures (CATS), the $287 000 grant is
being used to build an online library of spectral
lines. Frank is looking at what kind of signature a
planet’s technology might leave in its spectra. The
spectral templates will come from running climate
models that depend on a planet’s features, its host
star and the viewing instrument, all of which can be
compared with what astronomers actually observe."

Which makes it less likely that civilizations are killed from outside, and more likely that they kill themselves.

I should start a book, taking bets on whether our civilization dies of biological or nuclear war, from climate change, environmental damage or resource depletion.

And how long we'll last.

EM, how about if resource depletion leads to climate change that provokes a biological war resulting in the ultimate, global nuclear war?

Entropic man said...
This comment has been removed by the author.
9:56 AM