I think Steve Goddard did (sort of) catch NOAA in a mistake or (?) exaggeration on sea level, though it seems to have come from their Communications department and not the actual report. In their press release on the just-released 2010 State of the Climate report they write "...sea level continued to rise," and that's what made it into the Washington Post. (Though the Post reporter should have questioned that; if his beat is climate science, he should have been aware that sea-level has been flat, at best, for the last few years.) But nothing in the report or the media briefing says that, at least that I've found. On the contrary, the report contains this graph (Figure 3.29, pg S100), which clearly shows that overall sea level (mass + steric) has not risen for about three years: 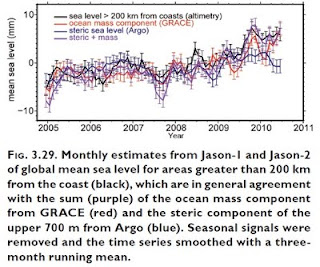 As usual, though, people like Goddard allow no room for simple mistakes, immediately calling them "clowns or criminals?" Sometimes people just make mistakes (and if it is found to be more than that it'd be troubling) but this is a bad one because, as media people should know, one mistake like this can distract from the message of the big picture. I've written them to ask.

PS: "steric" sea-level rise is that due to thermal expansion of water; the mass component, called "eustatic," is from an increase in ocean mass from glacier and (nonfloating) ice melt, dam releases, etc.

I'm not sure I understand. The steric component is derived from sea water temps down to 700m? Assuming that's true, if there is more deep ocean mixing than we know of, it couldn't it be wrong?
Or is it just what's left, after you subtract the eustatic element derived from ice melt data, from the total sea level rise?

I am also confused because the caption says Jason is in agreement with the sum (in purple) of ocean mass and steric components, which appears to be in an uptrend.

I noticed your Mauna Load Observatory CO2 widget on the side of the main page. Following rule #1, why would you record CO2 levels beside the world's most active volcano to represent global concentrations? Is that just another mistake?

No, it's not a mistake, but ignorance on your part -- human emissions of CO2 are about 100 times that of all volcanoes.

im not so sure
http://denialdepot.blogspot.com/2011/06/co2-volcanoes-or-man-its-your-choice.html