This BBC article, "Urban plants' role as carbon sinks 'underestimated,'" is about a study showing that the amount of carbon stored in the vegetation in Leicester, UK has been underestimated. OK. But then they jump into fantasy land about ways to reduce the country's carbon footprint.

The study finds that vegetation (mostly trees) in the city holds 3.16 kg Carbon/m2, which is about 7 times that of Britain as a whole (the country being mostly grassland). But then the study, and the BBC article, suggests that it would be worthwhile to plant more trees in the cities as a reduce Britain's carbon footprint. (The UK has pledged to reduce its 1990 carbon emissions by 80% by 2050.)


"If just 10% of this was planted with trees, the existing carbon pool across the city could be increased by 12%"

quoting the lead author of the paper, Zoe Davies of the University of Kent. But they don't look at the actual numbers. The study says (pg 8):


"If community initiatives were put in place by policy makers to encourage tree planting, resulting in 10% of the existing 159 789 urban gardens containing one more tree, there would be 927 tonnes more carbon (assuming they grew to an average size for a garden tree) stored in above-ground vegetation across the city. 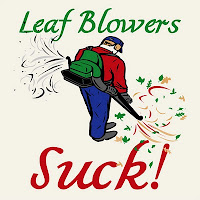 So the study is talking about the possibility of reducing 1 kt, or 0.1% of these emissions. Even if you put one more tree in all the city's gardens, you're only reducing the city's emissions by 1%. Plus, you have to keep replanting the trees as they die. Then some idiot will come along with a leaf blower (I hate leaf blowers, especially in cities) and blow away all the leaves dropped by all these trees -- how much carbon is that going to emit?

This seems like starting a new exercise program and insisting that you keep track of the two steps on and off your porch. OK, but what's really matters is how many times you walk around the block.

I like trees, but we cannot stop climate change by planting more of them in cities. The focus needs to stay on the big picture and the big possible picture-changers.

So the conclusion is: leaf-blowers are indeed the work of the Devil.

Trees won't stop climate change - neither will shutting down nuclear.

Some people are conflicted on priorities.

"The German government wants to encourage the construction of new coal and gas power plants with millions of euros from a fund for promoting clean energy and combating climate change."

"The plan has come under stiff criticism, but the Ministry of Economics and Technology defended the idea. A spokeswoman said it was necessary as the government switches from nuclear to other renewable energy sources and added that the money would promote the most efficient plants possible."

Nonetheless, David, urban forests have multiple, reinforcing benefits. I never use 'carbon storage' as a reason, but the stormwater, air quality, quality of life, energy savings and property values are reason enough. If they store a bit of C, great.

What trees do is cool down the area by transpiration and shading so you don't need as much a/c. They also cut down winds a bit, even in the winter (see evergreens) to hold down heating bills.